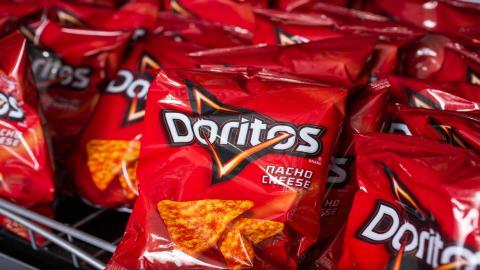 Doritos, owned by Frito-Lay’s division of PepsiCo, is putting a playful spin on its marketing, bringing consumers into the world of the snack giant’s iconic triangle-shaped chip through interactive augmented reality (AR) and social media experiences.

As part of the brand’s new Another Level initiative, consumers will be able to undergo a nationwide hunt using an AR lens on Snapchat called “Triangle Tracker” that converts any real-world triangles into Doritos. The experience rewards engagement through exclusive rewards.

A simultaneous campaign promotes further engagement with a TikTok component, where participants are encouraged to fulfill weekly challenges around famous triangle-shaped landmarks in New York, and Atlanta and Memphis, Tennessee.

"Doritos has always been known for its iconic, bold flavors, but this year we're leaning into another part of Doritos: its iconic triangular shape," said Stacy Taffet, senior vice president of marketing at Frito-Lay North America. "What better way to engage our creative fanbase than by encouraging them to think of Doritos whenever they see a triangle in the real world?"

Consumers can select whether they’d like to participate on Snapchat or TikTok — or both.

Snapchat: Users simply point the AR lens at any triangle — this also works with Dorito’s own packaging. Snapchat’s machine learning tech will automatically recognize the shape and transform it into a Doritos chip. Snapchat then generates a code and directs users to the Trinagle Tracker website where they can claim a prize — several incentives are in play including exclusive merchandise from favorite brands and a $250,000 grand prize.

TikTok: Doritos will issue weekly challenges for the chance to win $15,000. Users are tasked with finding “the coolest and most creative triangles in the world” and posting their video submissions on TikTok, tagging @Doritos and using the #DoritosTriangleTrackler and #Contest hashtags. The first challenge launched on August 24, when Doritos took over three iconic triangular buildings: West 57th Street in New York, Bass Pro Shop in Memphis, Tennessee, and 101 Marietta in Atlanta. Doritos will announce two more challenges every Wednesday until mid-September.

Doritos takes virtual experiences a step further by tapping into the gaming community. Fortnite players will be able to explore a brand-new Doritos Triangle Island, created in Fortnite Creative mode. The experience includes hours of gameplay and several hidden easter eggs. Participants can join in on three classic mini games with a twist: Nacho Usual Spleef, Spicy Sweet Chiliwars, and Doritos Crash Course Deathrun. Doritos also partnered with StreamElements, leveraging AI to allow streamers to replace triangles in all of their favorite games with Doritos chips.

[Read more: How Unilever Is Prepping Its Teams For the Metaverse]

Additional campaign components include partnering with brands for more triangle hunting with special prizes like a custom Doritos controller skin for Xbox, an exclusive Doritos Concert Kit from Vivid Seats, and a limited-edition Doritos-inspired jean jacket from GUESS.

The brand has also partnered with the MTV VMAs for additional easter eggs when the Doritos Extended Play Stage appears during the event on August 28.