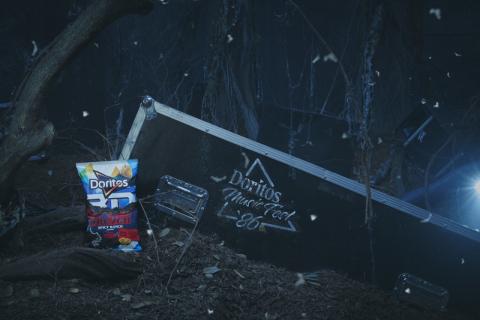 Who wants a new flavor of chips if there’s not a celebrity or virtual event tied to it?

Brands are increasingly trending toward collaborations and techy experiences in order to elevate new product launches. The latest to do so? Doritos and Cheez-It.

Not only are these Dorito bags branded to the television franchise, but Doritos will be launching a virtual “Live From The Upside Down" concert on June 23.

Meant to immerse consumers in the world of "Stranger Things," Doritos built out a backstory about “the greatest concert that never happened” in 1986, allowing fans to enter a “portal to another dimension” to attend the event.

The concert will include '80s headliners, including The Go-Go's, Corey Hart, and Soft Cell. Pop star Charli XCX will also take the stage for a collaboration with one of the '80s bands. Tickets will only be available via Dorito purchases or at Doritos.com/StrangerThings.

And what’s a concert without merch? The company is tying the virtual experience together by offering branded bags, t-shirts, and posters.

[More on digital experiences: The Metaverse As a Piece of Brands' Consumer Engagement Puzzle]

"Doritos and Netflix 'Stranger Things' are the perfect combination because we are truly taking it back to 1986 where it all started," said Caio Correa, senior marketing director, Frito-Lay North America.

"This is the year the original Doritos Cool Ranch flavor was brought to market and the year this season of 'Stranger Things' takes place,” added Correa. “Talk about a strange coincidence! We can't wait for our fans to join us and Netflix for this first-of-its-kind 'Live From The Upside Down' concert."

Cheez-It, a brand within The Kellogg Company portfolio, went the musical route for its latest promotion as well, leaning on some obscure Swiss research that found aging cheese to hip-hop music could strengthen the taste and smell. 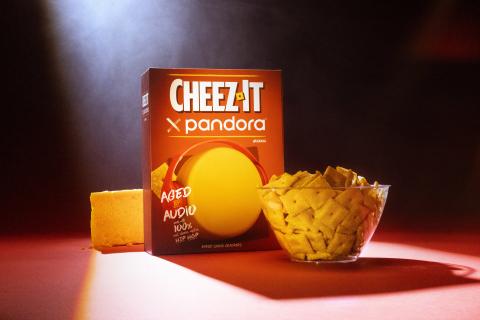 As a result, the company launched “Cheez-It x Pandora Aged by Audio” crackers, the first snack aged with a mixtape curated by music and sonic experts at Pandora.

Consumers can see whether or not the unique vibrations of the hip-hop playlist used to age the cheese for six and a half months had an effect on the flavor of their Cheez-It purchase.

"After six months in the making, we're thrilled to finally share this absurdly delicious collaboration with our fans," said Erin Storm, senior marketing director of Cheez-It.

"Our innovations team is always exploring new ways to bring more unique experiences to our fans, and ‘Cheez-It x Pandora Aged by Audio’ is the perfect way to provide our dedicated fans with a truly first-of-its-kind snack while celebrating the joy music brings," she added.

Cheez-It is offering a free, 90-day Pandora Premium trial offer to eligible customers with the purchase of the limited-edition Cheez-It x Pandora Aged by Audio product. And just like Doritos, there’s swag involved: super-snackers can earn free shipping by purchasing merchandise such as headphones, bucket hats, crewneck sweatshirts, and t-shirts.

Bringing it all together is a collaboration with SiriusXM radio host Sway Calloway, who is introducing the new sonically-aged snack via his new YouTube series, Living Legends.