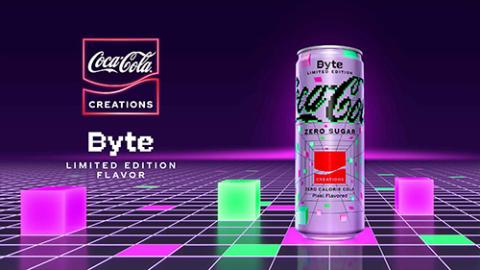 Coca-Cola has more than 1,500 innovation initiatives planned this year.

Coca-Cola is marrying nostalgia with gaming for its next product innovation — with a little augmented reality thrown in for good measure.

The second launch as part of Coca-Cola Creations — the CPG’s cross-functional innovation platform dedicated to digitally-inspired limited-edition products — the Zero Sugar Byte is meant to harken the “playful” taste of pixels.

(If that sounds interesting, remember that the Starlight, the first Coca-Cola Creations launch, was space-flavored and intended to recall the taste of stargazing around a campfire.)

Zero Sugar Byte is launching in very limited quantities in select countries in Latin American retail outlets this week. When it becomes available in the United States on May 2, it will only be offered in one SKU for purchase on Coca-Cola’s direct-to-consumer site, Coca-Cola.com/creations — sold as a two-pack with one can to consumer and one to collect, a Coca-Cola spokesperson told CGT. It will also later roll out to China retail on May 23.

There are fewer than 25,000 of the two-packs available for purchase, and so the "portal" will only be open for a limited period of time while supplies last.

The Coca-Cola Creations site also features an augmented reality game in which consumers can scan the product’s package with their phone to unlock a game that guides “BYTE,” the forgotten 8-bit pixel who was left behind when Coca-Cola Byte entered the metaverse. As part of this, players’ finish times will appear on a leaderboard that can be shared on social media.

Though it’s not live yet, consumers can register to be notified when the experience activates.

Looking beyond augmented reality for consumer engagement, the No. 14 consumer goods company is also turning to Fortnite. In partnership with lifestyle and gaming organization PWR, it’s developed Pixel Point — a Fortnite island where players can interact with other gamers in four multi-player minigames: The Castle, The Escape, The Race and The Tower. Each room in turn contains challenges that players can only solve by working together.

It was in Fortnite that Zero Sugar Byte first appeared, according to CNN, showing up in the game last month.

Coca-Cola has more than 1,500 innovation initiatives planned this year, James Quincey, chairman and CEO, shared at the Consumer Analyst Group of New York (CAGNY) conference earlier this year, with about 500 projects representing 80% of the contribution to gross profit from innovation. Some, like  Starlight and Zero Sugar Byte, will simply be limited-edition releases, while others are being designed with scalability as a priority.

Quincey described the strategy as being “about having enough shots on goal of all different types,” whether that’s through experimenting or bigger bets, so they can ultimately support the core brands and find new avenues for growth.

In addition to Fortnite, Coca-Cola has been flirting with other next-gen digital experimentations like NFTs, launching its first NFT last year as part of a four-day auction on the OpenSea digital marketplace. Coca-Cola also accompanied that launch with a party in Decentraland metaverse world.

Is the metaverse actually here yet? Subscribe to the Tech Transformation podcast for an upcoming episode with Mike Proulx, Forrester Research VP research director, to dig into their “State of the Metaverse Report” and break down some myths and realities about the metaverse. Have a question you’d like to ask? Reach out.