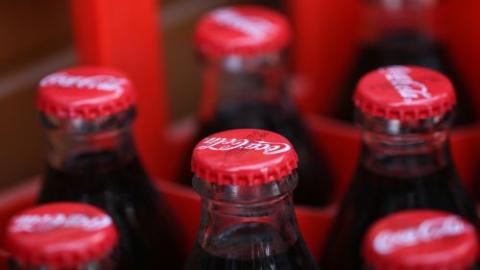 Coca-Cola is shooting for the moon with a new innovation platform, Coca-Cola Creations, that will focus on “new expressions, driven by collaboration, creativity and cultural connections.”

Leveraging the new platform, the brand will release limited-edition products that intersect the physical and digital worlds. Coca-Cola Creations was developed under the “Real Magic” brand, launched in late 2021.

According to Oana Vlad, senior director of global brand strategy at The Coca-Cola Company, Coca-Cola Creations “aims to surprise, delight and engage global audiences through magical and unexpected tastes, moments and collaborations.”

As part of the “Real Magic” initiative, Vlad said Coca-Cola is looking to “connect with and celebrate the experiences that bring joy to young people today.”

The first product to launch under Coca-Cola Creations is Coca-Cola Starlight, a beverage intended to combine the classic Coke taste with sensations of stargazing around a campfire and a cooling sensation that reflects the cold journey to space. Add in a splash of reddish hue and you’ve got the new space-themed product.

Coca-Cola expanded its otherworldly theme to the product’s packaging, featuring a light-filled star field, and marketing, which taps global pop-star Ava Max for an augmented reality concert experience, accessible by scanning the can or bottle.

The experience design and production was created by Virtue (the agency powered by VICE) and Tool. Coca-Cola partnered with Forpeople on the packaging design.

Starlight also partners with streetwear brand Stable, and will be marketed using social filters on Instagram. It’s available for a limited time across North America, and in select countries globally in zero-sugar only.

“Thirty-five years ago, Coca-Cola partnered with NASA to become one of the first soft-drinks to travel to space,” added Vlad. “That same passion for space still exists today. With Coca-Cola Starlight, we wanted to celebrate the remarkable ability of space exploration to inspire generations to discover new worlds of infinite possibilities. We set out to bring that concept to life through a simple sip, capturing some of the mystery and essence of what we love about space."