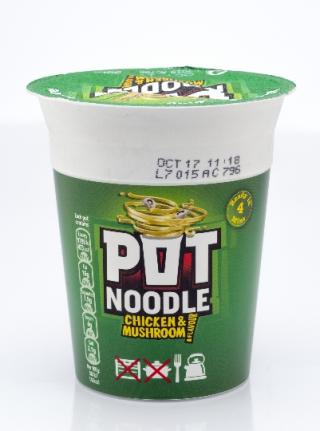 Back in 2020, Unilever brand Pot Noodles’ new flavor formulation failed to land with consumers and the extension was labeled a flop. Rather than running from the mistake, however, the UK snack company has opted to own it, turning the less-than-stellar feedback into a new marketing campaign.

Relaunched in July this year, Pot Noodle’s new messaging for their block noodles has a "front and center" style, using consumer responses — many of them scathing — to reflect their sentiment back at them in a humorous way.

One Twitter post, for example, features a framed customer review inside a "Museum of Failure." Another features a tongue-in-cheek nod to the less popular, subtle-tasting version, writing "Lost the Pot — Now With Flavor."

Instant foods are a student staple and this smart, self-aware messaging is sure to land with the GenZ consumers who made up a sizable portion of Pot Noodle’s buyers. In fact, the relaunch was timed to coincide with college classes starting up again in the early part of fall.

"Nielsen data shows that block noodles are growing rapidly in the Instant Hot Snack category, at 28% vs the Pot format at 9%. And their percentage of the market looks set to only get bigger," said Angus Giddins, the snack’s brand manager, in a press release.

But why draw attention to negative feedback? "It’s the truth," said Angus. "We were gutted that we got it wrong first time. We know honesty is well received by our consumers and putting a consumer mindset on, it is refreshing when brands are honest. I guess we were nervous to an extent, but honesty is always the best policy."

High-risk marketing can also bring high rewards — not only in creating attention-grabbing copy, but also in boosting the bottom line. Adopting a self-deprecating style also lets consumers know brands are listening to them, taking things to heart and acting on their insights.

The campaign still has two months to run, but early responses showed it reached 6.3 million unique users and 16.1 million impressions in just a few weeks. "We didn’t just listen to consumer feedback; we did something about it. And the good news is that’s not just showing up as eyeballs on social," said Angus. "Recent figures from Nielsen are showing an average boost to sales of 20% with these new packs."