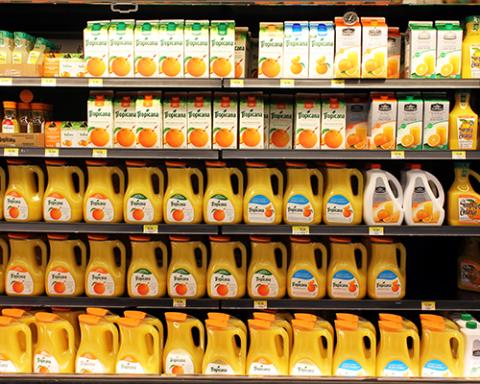 At-home consumption remains very high, with demand for CPG products up almost 9% in the second quarter vs. last year.

While the consumer goods industry is more adept at navigating COVID’s curveballs, labor and supply chain obstacles remain persistent barriers to meeting increasing consumer demand. As a result, CPGs often find themselves in a game of whack-a-mole as they continuously reevaluate operations to stay one step ahead.

“Agile is the new smart,” Ellen Davis, executive VP of the Consumer Brands Association, said to CGT. “If CPG companies have learned anything in the last 18 months, it's that agility is going to win.”

This has translated into companies thinking about winning from the beginning, she said, looking to such things as adjusting pack sizes, reducing SKUs, keeping trucks on the road, and ensuring workers have an appropriate amount of personal protective equipment. All of these adjustments have been necessary to meet the shift in consumer expectations and new logistical requirements accompanying them.

And though companies have learned quite a few lessons during the pandemic, the industry remains still in a bit of a game of whack-a-mole, Davis said.

“You start to solve one problem, but it creates a couple of others,” she noted. “You have to think about, how can this change R&D? How does it change supply chain? How does this change the consumers’ path to purchase?”

As the behavior changes take hold and create ripple effects throughout transportation, product discovery and even food safety, companies are still determining which changes will become permanent and how to thusly adapt operations. The convenience of curbside pickup, Davis pointed out, has now become part of many consumers’ DNA.

Labor remains one of the most significant challenges confronting the industry at this time. Of the 826,000 openings in U.S. manufacturing, 362,000 were in non-durable manufacturing where CPG jobs are recorded, according to the Consumer Brands Association, which noted the CPG industry has added just 6,000 jobs in August.

Despite food manufacturing wage increases up 4.1% year over year in August — and production and non-supervisory wages growing 5.8% — this still hasn’t translated into workforce growth.

"In general, [the U.S.] has not kept up with educating the next generation about data and digital trends in a way that will make any company feel like there is enough great talent to go around."
Ellen Davis, executive VP, Consumer Brands Association

The role of COVID vaccine mandates remains a complicating factor: As CPGs grapple with the decision to require them, some are shifting from incentives to mandates whether it’s for all employees, certain roles, or new hires, Davis said. While a Consumer Brands Association survey of 39 CPG companies conducted July 28 – Aug. 3 reported 91% of companies aren’t requiring vaccines, two-thirds hadn’t ruled it out or were actively considering it.

Tyson Foods, for example, recently said it would add to the number of sick days vaccinated employees can accrue, as well as announced support from the unions representing more than 80% of its U.S. workforce regarding its vaccination requirement.

The Delta variant has changed the conversation, Davis said, and it remains a top-of-mind issue for many CEOs, centered by the desire to both keep employees safe and the supply chain running at a time when demand is still off the charts.

“As we continue to see positions turn over, maybe you'll see a gradual acceptance of vaccines because it will be easier for people vaccinated to secure their next opportunity,” Davis said. “In the meantime, I think companies are trying to make sure they're being thoughtful about how to best protect their employees, while also [ensuring] they're not making a position they feel is unfair or improper.”

Upon the release of President Biden’s COVID-19 Action Plan last week, in which employers with 100 or more employees will be required to ensure workers are vaccinated or tested weekly, the Consumer Brands Association called on the Biden Administration to provide more clarity. “As with other mandates, the devil is in the details. Without additional clarification for the business community, employee anxieties and questions will multiply,” said Geoff Freeman, Consumer Brands Association president/CEO, in a statement

While many CPG labor challenge conversations have centered around the difficulties of staffing facilities and manufacturing sites, digital upskilling conversations are simultaneously occurring on the corporate side of the business.

Thanks to the industry’s overnight digital acceleration and subsequent rethinking of how to sell to consumers, U.S. companies have been forced to reevaluate whether they have the necessary talent to meet such heightened expectations — including planning for the next generation of the workforce.

“In general, our country has not kept up with educating the next generation about data and digital trends in a way that will make any company feel like there is enough great talent to go around,” Davis said. “The supply of people who can be really savvy at digital trends has an increase, but the demand has gone way up as CPG — and retail and banking and healthcare and everybody else — needs that talent.”

Looking ahead to Halloween and the winter holidays, port congestion remains a headwind — including the CPG companies manufacturing in the U.S. but sourcing ingredients from overseas — while trucking is navigating higher diesel prices. Things are further complicated by input inflation: Corn was up 115% year over year in August and aluminum up 93%, according to the U.S. Bureau of Labor’s Producer Price Index.

At-home consumption remains very high, with demand for CPG products up almost 9% in the second quarter vs. last year, according to the Consumer Brands Association's Economic Pulse Q2 Report. The trend continued throughout the summer, with July demand up 5.7% vs. the prior-year period.

However, with some Americans returning to former activities, such as sporting events, schools, entertainment and the office a few days a week, CPG consumption is shifting a bit, Davis said.

“It's making food service more of a lucrative part of the business again,” she noted. “It is certainly impacting the school lunch business for a lot of CPG companies. For companies like Clorox and Lysol and P&G with commercial lines, you've seen a lot of them partnering with hotels, airlines or sporting arenas to ensure the safety and health of the people who are there. So that's another good accelerant going into the holiday season.”

The Consumer Brands Association this month also released an operational standard as part of its Contactless Delivery Task Force. The standard is a set of data requirements for the critical steps in the pickup and delivery process, intended to help companies shift from a paper-based delivery process to a digitized supply chain.

First formed in April 2020 and officially launched in October 2020, the task force was developed under the guise of safekeeping the workforce and strengthening the supply chain during COVID. It seeks to provide an opportunity for both retail and CPGs to rethink archaic practices, enabling them to uncover new and more efficient methods. The task force today contains 52 CPG, companies, retailers and carriers, including Clorox, Coca-Cola and Land O’Lakes.

Many companies using the standards in the pilot reported dwell time reduction of about 40 minutes, expected to significantly reduce costs and resources. “We've been really encouraged with the response that we've seen so far,” Ellen Davis, executive VP of Consumer Brands Association, noted.

The task force ultimately aims to create widespread adoption of the standard, with corresponding technology allowing for incremental efficiency gains for all stakeholders.