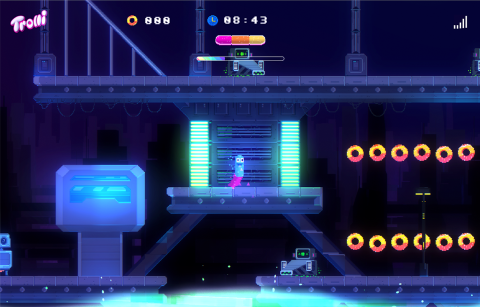 While it’s unclear exactly what the state of trick-or-treating will look like this Halloween, candy companies are wasting no time in engaging consumers in brand-new ways this year.

Ferrara, for its part, is tapping new tech in order to engage consumers during the scary season, including honing in on the rise of at-home and mobile gaming.

As part of this, the confectionary manufacturer partnered with Active Theory and Sony for two separate campaigns, one of which leverages augmented reality for the first time

With its Trolli brand — which is “all about shining a weirdly awesome light in the darkness,” Dave Foldes, senior brand manager for Trolli, told CGT — it sought to create a campaign that both leaned into gaming and leveraged tech from start to finish.

In teaming with Sony PlayStation and Active Theory, they designed “Deliciously Dark Escape,” a multi-layered game journey only accessible by scanning a code on certain Trolli gummi worm packages.

“As a brand that’s always looking for unique ways to engage with our consumers, we were inspired to create something unique and interactive that would motivate our new and existing fans to engage further with us,” Foldes said. “We know that 75% of U.S. households have at least one gamer, and 21% of those gamers are younger than 18 years old.”

The team developed a hidden site where gamers can engage with the Trolli brand while earning chances to win PlayStation and Trolli prizes.

Foldes said the company mined its consumer insights in developing the game “and discovered an authentic crossover between Trolli and gaming,” which served as the inspiration to offer PlayStation prizes.

Since launching in mid-September, the game has already had more than 26,000 unique users play the Trolli game, with users are spending more than 4.5 minutes playing. This gaming crossover is something the brand will tap into with future campaigns.

Foldes noted that Trolli’s retail partners are always looking for new ways to capture shopper attention, and the campaign is using technology for both in-store visual engagement and out-of-store experiences. The QR code on-pack provides access to the game, a 14-day PlayStation Plus trial and an exclusive Trolli Dynamic Theme for PS4.

The campaign is also encourages return purchases as each on-pack QR code provides access to the Trolli game for 10 minutes and unlocks more chances to win prizes.

The second campaign, “Haunted Candy Hunt,” isa mobile gaming experience developed with Sony Pictures Home Entertainment that features “Ghostbusters” characters. To play, users visit Ghosthuntntrap.com on their smartphones and use augmented reality to search for the Slimer character around their homes; they too can win Sony prizes during their pursuits.

The game, which launched on Sept. 23, intends to give consumers a new way to get into the seasonal spirit, said Mariah Havens, Ferrara senior brand manager, seasonal marketing, marrying the timelessness of the Ghostbusters franchise with the company’s Halloween assortment.