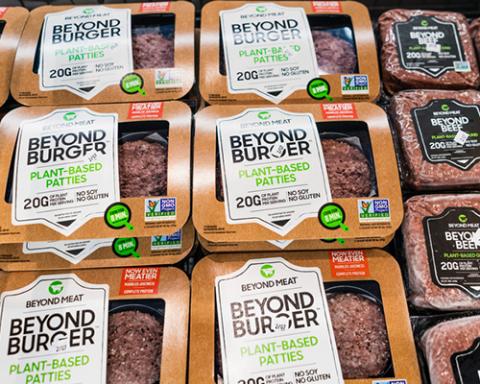 PepsiCo is forming a joint venture with Beyond Meat to take on the growing plant-based food market.

The two companies’ initiative, known as The PLANeT Partnership, will develop, produce and market plant-based protein snacks and beverages.

Financial terms of the partnership were not disclosed, nor were product details or timeline.

The companies will leverage Beyond Meat’s product development and PepsiCo's marketing and commercial scale. Ram Krishnan, PepsiCo global chief commercial officer, said in a statement that plant-based proteins represent a growth opportunity for the No. 3 consumer goods company, as well as a new step in its efforts to build a more sustainable food system.

Ethan Brown, Beyond Meat Founder and CEO, called PepsiCo an ideal partner — “one of global reach and importance” — and said they will release new categories and product lines.

The news was well-received well by the markets, sending Beyond shares soaring. UBS described the venture as having strategic merit for both companies — with multiple product avenues available — and also called out the value of Beyond Meat’s ability to leverage PepsiCo’s direct store delivery model, in a note cited by Seeking Alpha.

Plant-based food alternatives rang up $932.88 million in the U.S. for the last 12 months, ending Jan. 18, according to NielsenIQ data shared with CGT, up 45% from the prior-year period. The global plant-based food market is expected to reach $74.2 billion by 2027, according to Meticulous Research.