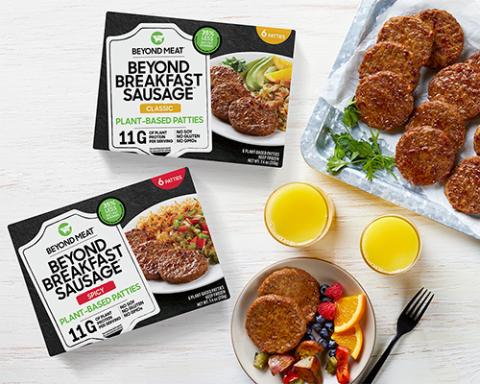 Fast Company’s annual ranking of the World’s Most Innovative Companies is out, and it’s a good year for food brands keeping their consumers’ health top of mind.

Winners were selected across 44 sectors by the media company's editors and writers, who also considered nominations submitted through an application process. Companies were judged on innovation, impact and what they had accomplished in the past year.

A total of 434 companies are honored, broken out by industry sector. Within the Top 10 Food Companies, it’s easy to see a clear theme emerge — one that prioritizes the health of our environment and the people within it.

Here’s a glimpse at the top five of the Top 10 Food Companies, and click here to see the full list.

Fast Company awarded Beyond Meat the title spot because of its leadership in plant-based meat development. The company has expanded to 77,000 distribution points in 65 countries, including over 9,000 Dunkin’s.

Described as the “Trojan horse of the salad wars,” Sweetgreen is feted for being both a good employer and a creative distributor. It offers five months parental leave and developed an Outpost kiosk where consumers can conveniently pick up their orders during time-crunched lunch breaks.

The start-up, which has developed a seed biocoating that reduces the need for environmentally harsh fertilizers, connects farmers with companies to help fund regenerative farming practices.

Notes Adele Peters: “At a time when many farmers are struggling financially, Indigo provides them with a new revenue stream: Terraton guarantees at least $15 per ton of sequestered carbon.”

The dairy company is lauded by Fast Company for embracing fair trade in the name of dairy farmers, as well as its moves into plant-based products.