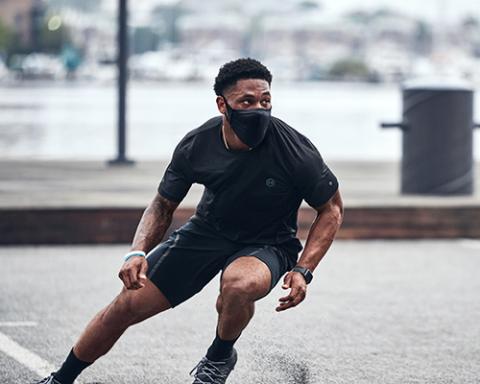 Under Armour sees its new sports masks as an opportunity to convert new customers into loyal ones.

Under Armour is refining its digital strategy as it moves toward a consumer-direct focus, consolidating its app ecosystem and aligning under a single e-commerce platform.

The apparel and footwear company reported flat revenue of $1.4 billion for the third quarter, supported through better than expected demand across the wholesale and DTC channels. Although apparel revenue dropped 6%, footwear was up 19% and accessories grew 23%, the latter of which was driven by its new masks designed for playing sports during the pandemic.

Despite higher than anticipated demand, wholesale revenue was down 7% as a result of lower sales in North America. Under Armour, which is the No. 60 retailer on RIS News’ Top 100 ranking, will reduce its overall North American whole sale distribution points by about 2,000 to 3,000 doors over the next few years. The departures will be primarily in North America, leaving it with a presence of about 10,000 doors by the end of 2022.

President and CEO Patrik Frisk emphasized that wholesale remains an important part of the company’s future, “but as the broader retail landscape continues to evolve, so must we.”

Direct-to-consumer business increased 17% during the quarter, driven by better-than-expected e-commerce. It saw more than 50% global e-commerce growth, with increases experienced in every region.

In order to drive premium brand positioning and support healthier margins, Under Armour will continue to pull back on promotions and discounts in its direct-to-consumer channel.

The company completed its switch from its “homegrown” aging e-commerce platform to a new one in July, placing the majority of its global e-commerce sites on one scalable platform.

As part of this, Under Armour is working to unlock more robust CRM efforts for better personalized consumer interactions. This includes converting new consumers who’ve entered the site to purchase a mask, which is views as a big opportunity.

It will also further develop its loyalty efforts and will roll out several pilots around the world.

The company is also streamlining its app ecosystem by selling MyFitnessPal to investment firm Francisco Partners for $345 million, expected to close in the fourth quarter. It’s also discontinuing its Endomondo digital fitness platform at the end of this year.

The moves enable the company to focus on developing a single ecosystem placing MapMyFitness at the core, said Frisk.

“As we work to more sharply to define our strategy over the past few years, it became evident that MyFitnessPal did not fully align as a core asset with our target consumer needs, the focus performer,” he said. “We believe this divestiture sharpens our long-term digital strategy by simplifying our consumers’ brand journey and increases our ability to better harness the power of MyFitnessPlatform as we work towards a singular cohesive UA ecosystem.”

Frisk noted that the MapMyRun footwear platform, part of MapMyFitness, surpassed 1 million pairs of connected shoes a few weeks ago.

More on Direct to Consumer