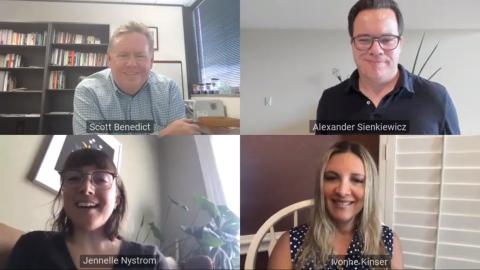 Retailers and consumer goods companies looking to break out of their old way of doing things can look to companies that never operated with the standard playbook to begin with.

When the pandemic began, online grocer Farmstead was abruptly thrust into the environment it had been preparing for — consumers clamoring for grocery delivery — it just didn’t expect it to happen so quickly. The tech-minded delivery service, which leverages artificial intelligence in inventory management to cut down on waste, has never viewed the grocery giants as its biggest competitors, said Jennelle Nystrom, Farmstead head of product, but rather the low adoption rates by consumers.

“When we started Farmstead, 95% of Americans had not tried grocery delivery,” Nystrom said as part of the “Digital Natives Driving Disruption” panel at Analytics Unite: The Summit for Retail and Consumers Brands, moderated by Scott Benedict, director and executive professor, Texas A&M University - Center for Retailing Studies. “[They] didn't think that it was something that was accessible to them from a cost standpoint, or from the quality of groceries they thought they would be getting.”

Clearly, that all changed in March, accelerating a process the company expected to occur over several years.

But while the demand has skyrocketed, the infrastructure for many grocery retailers simply isn’t in place to support it. So now in addition to providing its own delivery services, Farmstead is working with grocery chains to implement its proprietary software.

Being proactive in communicating with consumers is crucial right now, Nystrom said. “Just getting groceries is something that used to be an easy chore but is now fraught with the fear of exposing yourself to this virus. People want information. They want updates. Before our messaging to customers was very marketing focused … but now we layer in updates on what is going on, what to expect, and how we are doing everything in our power to help our customers get their groceries.”

Spiraledge, which operates online retailers SwimOutlet.com and YogaOutlet.com and digital swim training and workout platform Swim.com, likewise received an influx of traffic during the shutdown. Chief marketing officer Alexander Sienkiewicz said the company’s sales priority during that initial surge was to ensure profitability on that first transaction because it was unclear what the lifetime value (LTV) would look like from these new customers. Once physical retail reopened, would they return to their old shopping habits?

"People want information. They want updates. Before our messaging to customers was very marketing focused … but now we layer in updates on what is going on, what to expect, and how we are doing everything in our power to help our customers get their groceries.”
Jennelle Nystrom, Farmstead

One major shift as part of this was moving from a ROAS (revenue on ad spend) to a MOAS (margin on ad spend) model.

“We worked on building a signal to Google to really optimize its algorithm to ensure that we're actually profitable on a margin dollar basis for those transactions that are coming in through Google paid ads,” he said.

And while many companies, especially direct-to-consumer businesses, are willing to lose money on that first transaction with the hopes they're get a subsequent order or increased LTV, it remains ambiguous to Spiraledge, especially as subsequent order values are down vs. what the company typically saw pre-COVID-19.

Although the swim business initially took a hit as pools closed and people vacationed less, the company’s yoga and athleisure businesses have seen tremendous growth.

For Avocados From Mexico, a marketing company that drives sales of avocados, it knew it had to re-imagine its Cinco de Mayo campaign for an environment in which most public eating areas were closed or facing limited capacity. Within 10 days it developed the Homemade Cinco campaign that was shelter-in-place-friendly, marrying e-commerce features with social media engagement.

As a result, the brand saw more than 6 billion social impressions during the campaign — which is even higher than the results it experienced during the Super Bowl — transforming it into its most success campaign to date, said Ivonne Kinser, Avocados From Mexico head of digital marketing.

As the company moves through the pandemic, it’s relying on its consumer data platform with predictive capabilities and real-time personalization data to navigate new consumer demand signals.

“We built consumer clusters, and those clusters are being fed by new interactions of those consumers. We have right now over 80 million user IDs and we have those clusterized in different segments,” Kisner explained.

Couldn't make Analytics Unite? Want to re-watch a keynote speaker or keep exploring partners from the exhibit hall? Don’t worry! For the next 30 days, come back (at your leisure) to watch, download, and explore the virtual summit as much as you like.