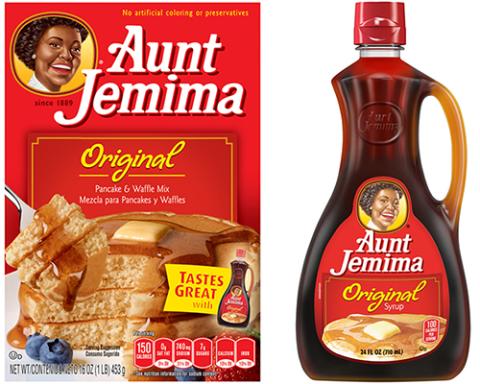 Several consumer goods companies announced they would remove or reevaluate brands because of racist stereotypes, and those well-versed in multi-cultural branding and marketing say it’s a good step — but just a first one.

PepsiCo announced it will remove the image of Quaker Foods’ Aunt Jemima from its packaging starting in the fourth quarter and will change the brand’s name at a date to be announced.

In a statement, Kristin Kroepfl, Quaker Foods North America VP and chief marketing officer, said the company is taking a hard look at its brand portfolio to ensure it reflects the company’s values and meets consumer expectations.

"We recognize Aunt Jemima's origins are based on a racial stereotype. While work has been done over the years to update the brand in a manner intended to be appropriate and respectful, we realize those changes are not enough," she said, adding that the company will gather diverse perspectives from within the company and the Black community in the brand evolution.

As part of this, the Aunt Jemima brand will also donate at least $5 million over the next five years to “create meaningful, ongoing support and engagement in the Black community.” PepsiCo chairman and CEO Ramon Laguarta also announced the company is implementing $400 million-plus set of initiatives over the next five years to lift up Black communities and increase Black representation at PepsiCo.

See also: CGs Leading with Purpose and Buy-In Are Best Positioned to Succeed

Shortly after PepsiCo’s announcement, ConAgra Brands issued a statement that it’s reviewing its Mrs. Butterworth’s brand and packaging, while B&G Foods said it would do the same for its Cream of Wheat packaging.

Mars, meanwhile, said it will evolve the Uncle Ben’s brand. Caroline Sherman, VP of corporate communications, says Mars doesn’t yet know the exact changes or timing for the changes to the brand, but said they are evaluating all possibilities.

“As a global brand, we know we have a responsibility to take a stand in helping to put an end to racial bias and injustices. As we listen to the voices of consumers, especially in the Black community, and to the voices of our associates worldwide, we recognize that now is the right time to evolve the Uncle Ben’s brand, including its visual brand identity, which we will do,” Mars said in a statement.

Included within their statements, many of the companies also reaffirmed their stands against racism and outlined their commitments to effect change, while acknowledging the work they still need to do to better advance racial equality.

Now is precisely the time for brands to do their homework on their histories and how they relate to race, however problematic they may be, Dr. Jason Chambers, an advertising professor at the University of Illinois and author of “Madison Avenue and the Color Line: African Americans in the Advertising Industry,” tells CGT. They also need to formulate their response, as those that fail to do so are setting themselves up for criticism in extremely public ways.

“First and foremost is to understand that history, and then once you've got that knowledge, you’ve got to presume that said knowledge is also available to others who may be interested in holding you up as the latest poster child for something that's wrong with advertising, branding, marketing, as related to race,” he says. “Be prepared to respond to that and/or be prepared to make the necessary adaptations to your brand and your brand story. Acknowledging that past could very much be part of it as well.”

“Consumers — particularly Millennials and Gen Z — are actively seeking out brands that not only espouse their values but operationalize them."
Dr. Kevin Thomas , Marquette University

Dr. Judy Foster Davis, a professor of marketing and integrated marketing communications at Eastern Michigan University, says companies that fail to acknowledge problems with their brands run the risk of appearing to be silently complicit with systemic racism, especially those with names or symbols associated with racist practices.

Revenue and any acquired brand equity will also certainly suffer, notes Dr. Kevin Thomas, a professor of multicultural branding in the Race, Ethnic and Indigenous Studies Program at Marquette University.

“Consumers — particularly Millennials and Gen Z — are actively seeking out brands that not only espouse their values but operationalize them,” he says, “and consumers across racial categories are valuing racial justice (for now).”

And while this isn’t the first time these conversations have come up, Davis says the recent global demonstrations are contributing to brands examining themselves and reputations more closely.

“Perhaps it is an inflection point. Brand managers want to be perceived as being on the ‘right side’ of these issues,” she says, noting that companies must be careful not to appear as pandering so that consumers will continue to support their brands. “They need to behave in a manner which aligns with their principles in an authentic way.”

Indeed, how brands respond in these situations plays a large role in consumer trust and can have a lasting impact. “You can set a generation’s perception of your brand within a matter of weeks or months,” says Chambers.

Dropping offensive and stereotypical brand names and symbols is a good start for consumer goods companies, but it’s just one of many moves that need to be made. Companies must dismantle the structural racism within their marketing, hiring, sourcing and distribution processes, says Thomas, as well as examine how these processes have historically advantaged white Americans.