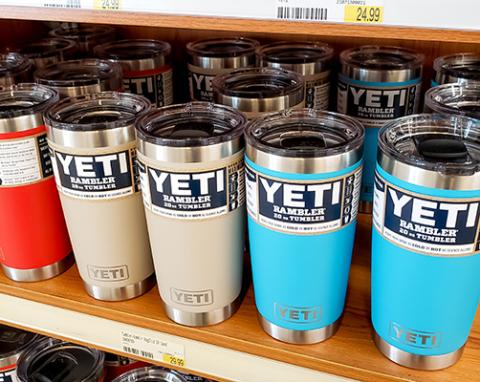 Yeti is bullish on the opportunities unlocked by its data analytics and data intelligence initiatives. Editorial credit: TonelsonProductions / Shutterstock.com

Yeti’s omnichannel strategy is paying off as it plots its international expansion and reaps the reward of consumer data.

The cooler and outdoor accessory rand and retailer grew net sales 23% year over year in the third quarter to $362.6 million. Direct-to-consumer net sales grew 31% to $197.1 million, and the company recorded double-digit year-over-year percentage increases in revenue per customer.

DTC represented 54% of Yeti’s sales mix during the third quarter, vs. 51% the prior year, with Yeti.com serving as its largest DTC business.

“Overall, we are making great strides in our data analytics and are focused on leveraging data to personalize the brand and product journey,” said Matthew Reintjes, Yeti president and CEO, in an earnings call.

The company implemented an enhanced merchandising approach during the third quarter, including improved store layout and expanded gear garage destination. It also opened its ninth store in Houston during the quarter and will open its 10th location in Scottsdale, AZ, this month.

Though Reintjes said wholesale remains an integral part of Yeti’s ability to connect with consumers, as well as a key component of its international expansion plans, it will reduce its independent wholesale footprint to approximately 3,000 accounts. Wholesale net sales grew during Q3, increasing 15% year over year, to $165.5 million.

Tech investments on the Yeti roadmap include enhancements to SAP, website optimization, expanded data analytics capabilities, product R&D and increasing capacity. And as part of its global expansion, the company is also building out its own infrastructure and more cost-effective 3PLs.

“We believe that having a direct connection with our wholesale partners and having a direct e-commerce presence, and also having direct marketing relationships, was important instead of kind of the faster use of distribution partners,” said Reintjes.

The company does have 3PL support in its existing markets, he noted, as well as an e-commerce presence to help drive the performance marketing within its digital business.

“[We’re] building out our teams smartly so that they can take advantage of both the consumer engagement, but also all the operational backbone,” Reintjes said. “We think that's a really scalable model. We think it's a cost-effective model, and it's one that has now worked in three major regions and one we look to replicate as we expand further.”

“Our team just continues to get smarter and smarter about it, and let the data and the intelligence lead the way.”
Matthew Reintjes, President and CEO, Yeti

Yeti is also bullish on the opportunities unlocked by its data analytics and data intelligence initiatives.

“We're really excited in what we're seeing in the customer data as we've collected it over of a long enough period now where we have a pretty good look at what the customer makeup looks like,” said the exec, adding that they’ve seen further customer acquisition growth this year.

“We've seen it continue as our intelligence gets better, as this big volume on the acquisition side comes in. We're more comping it, and we're also driving higher retention rates,” he noted. “So in addition to the acquisition side, we're driving strong retention rates … and then you combine that with … the double-digit increase in revenue per customer. So it's a really nice formula.”

The company is leveraging its strong retention rates to gain a stronger understanding of its existing data, as well as inform consumer buying patterns, including repeat purchases or likelihood to buy again.

“Our team just continues to get smarter and smarter about it, and let the data and the intelligence lead the way.”

“It's a really good balance of using the data to help us with retention and repeat consideration, and then using that experience and how customers came into Yeti to feed the top of the funnel in the acquisition.”

Reintjes added: “The benefit of having the incredible analytics team that we put together in conjunction with our e-commerce team working with our brand and creative team is that they're able to stoke both that acquisition and that retention and grow them together. So they're not really growing at the expense of the other.”

Though the company was impacted by the manufacturing shutdowns in Vietnam that resulted in a nine-week closure through late September, it’s resumed operations and expects little effect on fourth-quarter sales.

But, as with many consumer goods brands, Yeti is still navigating myriad supply chain challenges — including increasing freight costs and port and transportation delays — and intends to raise prices.

“The resulting cost pressures from freight increased in the third quarter, and we don't expect to foresee a near-term easing. So our team is fully focused on managing our mitigation efforts in the quarters ahead,” said Reintjes.

While raw material inflation has had a limited impact on Yeti thus far thanks to its ability to leverage its growing global scale and supplier relationships, the pressure is expected to persist into next year. As a result of these factors, the company will implement targeted price increases in 2022.