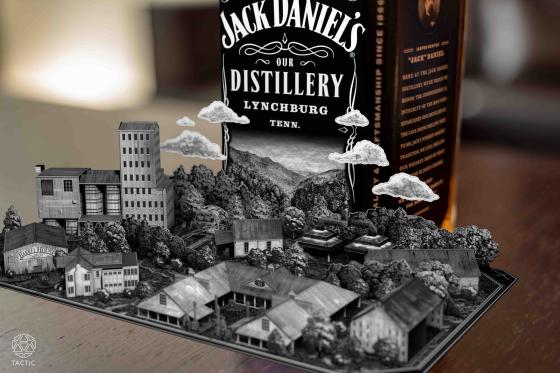 Through a partnership with San Francisco-based Tactic, the app takes consumers on an AR-enabled journey of the Jack Daniel's distillery through a series of “pop-up book style dioramas” that provide more than 10 minutes of content, according to a media release.

Launched April 15, the AR experience tells three separate stories of the brand’s history. The first turns the front label of Jack Daniel's bottles into a miniature version of the distillery. The second takes consumers through the process of making Tennessee Whiskey, while the third shares stories of the man behind the brand’s name: Jack Daniel.

“In today’s world, it’s important for us to reach fans and consumers where they are,” said Jeff Cole, modern media director for Jack Daniel’s. “That means sharing content that’s unique, interesting and relevant through a variety of digital [media].” Cole also pointed to the “immersive” VR experience the brand launched in 2016, as well as an ongoing podcast dubbed “Around the Barrel.” “This new AR experience is taking our brand storytelling to the next level,” he added.

After downloading the dedicated app, consumers simply point their mobile devices at any 50 millileter to 1.75 liter bottle of Jack Daniel’s to activate the experience.

“Augmented reality is in an exciting stage, and new technology and techniques are pushing the boundaries of what’s possible,” said Peter Oberdorfer, president of Tactic. “The Jack Daniel’s AR app features technology that sets the bar for creative storytelling in this new medium. The learnings and best practices from Jack Daniel’s will help inform the development of AR apps across different brands and industries.”

The Jack Daniel’s AR app is available for both iOS and Android platforms.

Jack Daniel’s joins a growing list of brands dabbling with AR. Tactic also has partnered with a number of Treasury Wine Estates brands, including a similar AR-enabled app for 19 Crimes that brought various characters depicted on bottle labels to life through a voice and visual storytelling experience.

According to Tactic’s website, the 19 Crimes label is based on “the founding of Australia as an English Penal colony, and the label depicts various prisoners who were banished to their new fate." The immersive experiences company tapped voice talent to bring the characters to life on each of the brand's seven signature lines.