By Alarice Rajagopal - 02/25/2015
Get great content like this right in your inbox.
Subscribe
Founded almost 200 years ago, Cadbury (www.cadbury.com) is the second largest confectionary brand in the world operating in more than 50 countries worldwide. A Mondelez International (www.mondelezinternational.com) brand, Cadbury is well known for its engaging and fun marketing and advertising such as the “Cadbury Gorilla” and more recently QR codes on its dairy milk range linking to entertaining videos to emphasize the joy of indulging in  Cadbury chocolate.

With a reputation for its engaging marketing campaigns in certain regions, the company was looking for ways to raise its brand awareness, increase penetration, and connect emotionally with its customers in lesser known regions.

So, Cadbury first went to India, where the market for gift chocolate is only 5 percent to 7 percent as compared to 15 percent to 35 percent in the rest of the world. The company wanted to increase that, along with its penetration to this market.

Therefore, Cadbury introduced the campaign for Cadbury “Glow”, to help develop the “Chocolate gift” market in India. To encourage this uptake of Chocolate as a gift, the company launched the integrated social video marketing campaign centered around the use of Idomoo’s (www.idomoo.com) personalized video.

In the campaign, users could automatically create a personalized video gift that incorporated photographs and names from their Facebook profile. The users start their journey by visiting the Cadbury Glow web site (www.cadburyglow.com), linking the page to their Facebook profile, and entering the phone number of the gift recipient. The recipients can then view the video when they receive a box of Cadbury’s glow chocolate, either via a QR code or by entering their phone number on the Cadbury Glow web page.

“We are giving a boost to our approach to product innovation. We believe that personalization can enhance the overall product experience — particularly in gifting,” says Josep Hernandez, senior director Global Communications Planning and Media, Mondelez International. “We got so much more than we expected — Facebook gives us an unprecedented pool of assets to enhance the connection between consumers, and Idomoo Social is helping us bring these to life.”

The word of the campaign was quickly shared through social media to create a decent buzz: #MakeTheMomentGlow reached around 1.6 million timelines and #GlowMoment reached around 17 million+ timelines with over 5K tweets.

In another campaign in Australia, the company wanted to introduce its audience to new flavors of its Dairy Milk chocolates, so it created the Australian Flavorism campaign — launched in April 2014 — which invites Australians to experience the full range of Cadbury’s dairy milk chocolate.

Each flavor in the 12 flavor range is matched to a “Personality,” and users are paired with their “flavor match.” The Flavor matcher app is the social component of the campaign, in which users are presented with a different video based on their flavor match, and encouraged to share and tag on social media.

Users are exposed to various PPC and unpaid social postings using Cadbury’s agency’s creative content, driving them to click through to Cadbury’s Facebook App, created with Idomoo’s Social. Based on the information from users’ Facebook profiles, such as age, interests and which pages they liked, they are matched with a Dairy Milk flavor.

A personalized video is then generated from the users’ profile pictures and introduces them to their flavor. Campaign participants were also invited to enter a competition after they watched their video which had a 65 percent click through rate and 33 percent conversion rate. This was after 90 percent of campaign participants watched their videos from start to finish and 12.23 percent shared the video on social media.

With the strong results from these two campaigns, Cadbury, Saatchi (www.saatchi.com) and Mondelez have upcoming personalized video campaigns in other markets worldwide, starting in Singapore.

“For a brand like Cadbury, which has an emotional, approachable and warm relationship with consumers, we saw a clear opportunity to partner closely with Idomoo by offering thoughtful givers a truly personalized gift that they can give their nearest and dearest,” closes Gil Horsky, senior innovation manager, Mondelez International. 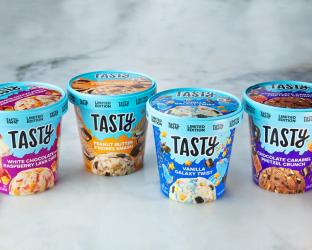