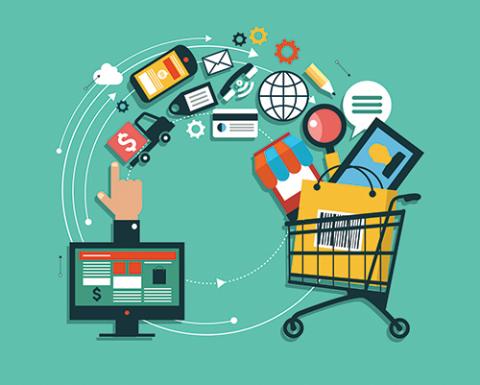 In just a few short years, retail media has become a critical channel for consumer goods brands to sell via online retailers.

A major shift in online retail advertising has taken place over the past few years that has completely transformed how consumer goods brands approach the web.

Retail media, the predominantly search-triggered, biddable ads on Amazon, Walmart, Target and other online retailers, is now the third-largest digital ad channel behind just paid search and paid social and set to reach $23.92 billion in 2021, or 1 in 8 digital ad dollars. For almost every product search on these stores — peanut butter, shampoo, batteries, shirts, etc. — consumers are returned thousands of results which makes being at the top of those results a key priority for CPGs.

In just a few short years, retail media has become a critical channel for consumer goods brands to sell via online retailers. Those that don’t engage risk low visibility and low sales. Even if a consumer is searching for your brand-name product, competitors can swoop in with a targeted retail media ad and steal the sale.

The rise of retail media itself has been a game-changer for consumer goods brands. But it’s the cascading effect on the rest of their digital marketing that is transforming how these companies approach the web.

Now that CPGs can influence online shoppers with retail media, it makes sense to rethink where to send ad traffic

Before retail media, all of a brand’s online advertising efforts had to reach customers before they entered an online store. Marketers used their ad investments on YouTube, Facebook, Google, and others to build awareness, affect consideration, and then hope (and pray) that this influence would be enough to carry consumers through to conversion.

For decades offline, shopper marketing has been the in-store solution to this challenge and CPGs spend around $100 billion annually on the tactic.

Digital publishers like Google and Facebook never allowed their advertisers to drive traffic beyond the advertisers’ owned properties (site or app). Originally, these policies were to protect consumers — for example, you think you’re going to your favorite online store when you click their ad, but then you land on a fraudulent site.

For CPG brands who rarely sell products directly, this meant bringing consumers to their sites, quickly educating them on the benefits of their products, and then redirecting those people to retailer partner sites (now available at these fine retailers) to purchase.

This is inefficient and wasteful advertising, but it was the only option available ... at the time.

However, a handful of years ago, petitioned by their largest clients who wanted to push ad traffic directly to retailers to shorten the path to purchase, Google and Facebook quietly changed their rules to allow for this to happen.

It is this combination that is transforming CPG digital advertising strategies:

With this new opportunity, CPGs are now strategically rethinking the role of and investments of their digital channels. Instead of using paid search and social investments across the funnel independently, they are being used in a complementary manner with retail media to best impact and influence consumers to drive revenue.

We call this new approachconnected commerce.

Connected commerce is the coordinated orchestration of digital advertising channels to drive maximum online sales guided by a unified commerce intelligence data layer to inform strategy. This differs somewhat from what these brands have done in the first twenty years of digital advertising, which is to plan and manage each channel individually as separate, full-funnel tactics. To drive activity, marketers have largely relied on the rigorous optimization of these programs independently from one another using their own, siloed [and incomplete] data intelligence layer.

Of course, there are different online commerce transaction endpoints for brands to consider which include online retailers, but also direct-to-consumer channels, social commerce, shoppable ads and apps — and many brands may be engaged in multiple or even all of these endpoints. A connected commerce approach is even more critical in these cases as the channel orchestration is inherently even more complex.

However, regardless of the tactics, channels, or transaction endpoints used, at its core, connected commerce is about strategically unifying the ad strategy to drive sales, all informed by commerce intelligence data.

Joshua Dreller is director of content marketing at Skai.