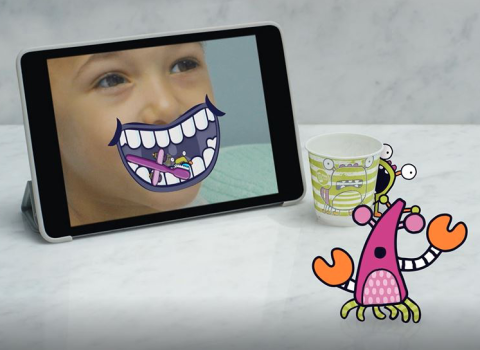 The three-ounce cups feature AR brushing games where kids fend off mouth-invading monsters or explore outer space to keep teeth clean and healthy. The games are brought to life through the free Blippar mobile app and run for two minutes — the brushing time recommended by the American Dental Association.

“We want to make it easier for caregivers to help children build a foundation of healthy oral hygiene habits while encouraging learning in fun and imaginative ways,” said Priti Lokre, Dixie's senior brand building manager. “Getting kids to brush for the full two minutes can be challenging and mundane. With these new interactive Dixie designs, the bathroom will become less of a battleground and kids will never rush the brush again.”

Two design series feature child-friendly themes, with eight designs in each package of cups. Depending on the design, users are prompted to scan the cup to explore the “molar system” in outer space or choose from various digital toothbrushes to fend off monsters and earn “golden molars” as rewards for completing the two-minute cycle. The more golden molars earned, the more toothbrushes with different super powers can be unlocked.

G-P is also introducing a five-ounce cup featuring fun, engaging riddles and brain teasers to help kids think while drinking or snacking. The answers are unlocked through the Blippar app.

Many companies are now using AR technology to create toys or put a new spin on tried-and-true favorites like Teddy bears, board games, action figures and coloring books. The trend started after the wildfire success of the Pokemon Go mobile creature hunting game, which brought AR into the mainstream during summer 2016. The toy has since generated approximately $1.8 billion.