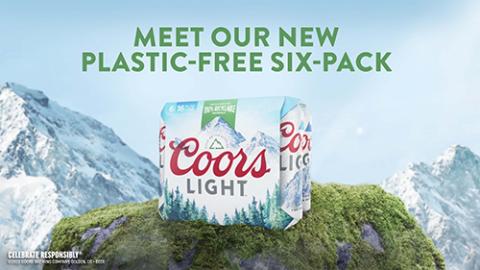 The move extends efforts for its Coors and Carling brands in a switch to recyclable cardboard sleeves last year in the United Kingdom. This latest initiative, which will start later this year, will affect brewing operations Molson Coors owns around the world.

The No. 62 publicly owned consumer goods company will further extend the packaging switch to the carboard carriers for its entire North American brand portfolio by the end of 2025, which it expects to save 1.7 million pounds of plastic waste annually.

Most, if not all, major CPGs have identified a reduction or complete elimination of single-use plastic as a primary sustainability goal, heeding to both consumer pressure and shifting regulations. A survey by GlobalData reported that over 60% of consumers said plastic-free packaging is important them, with 69% saying the same of sustainable sourcing of packaging materials.

Molson Coors intends to reach 100% reusable, recyclable, or compostable packaging by 2025, as well as have consumer-facing plastic packaging made from at least 30% recycled content.

“We believe that buying beer shouldn’t mean buying plastic,” said Marcelo Pascoa, marketing VP for Coors brands, in a statement. “That’s why we’re taking a step toward making packaging even more sustainable, and with this achievement Coors Light will save 400,000 pounds of single-use plastic from becoming waste every year.”

The company will show off the new packaging at a sustainability-themed pop-up in Brooklyn, NY, March 2-6.  The retail concept is constructed from plastic-free, recyclable, and reusable materials, including brewery scraps.