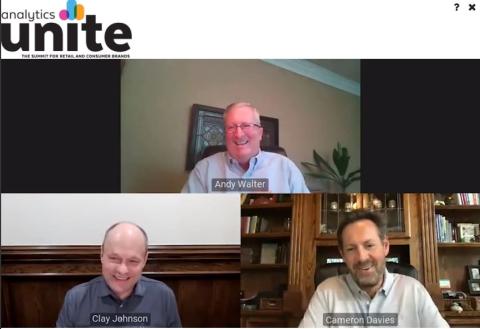 “Data is a key ingredient of our future success. I hate the term data driven. I just don’t like it; it sends the wrong message. We try to use the term to be data empowered.”

That was the sentiment during the opening keynote of Analytics Unite 2021, as Yum Brands chief data officer Cameron Davies and chief digital and technology officer Clay Johnson explored where the industries are headed, what it's going to take to emerge as a future leader, and the role analytics will play in building the future of business.

Session moderator and strategic advisor Andy Walter opened the fireside chat by talking about the brand’s recent growth. On April 28, Yum Brands grew its system digital sales to exceed $5 billion for the quarter. “However, more impressive than all of that is they are investing in technology, digitization, and really defining what that future of business looks like,” he said.

Johnson joined Yum Brands in October of 2019. “We had these roadmaps laid out and then the pandemic hit,” he explained, adding that dining started to close. So they started to wonder, "How do we start to take the brand to the consumer? How do we speed up the drive-thru or do things like curbside?"

Having an organization set up into a product model is what Johnson attributed to its success. He explained that it means the brand has a consumer-centric view first, “and then we lined up a lot of the features and releases.”

“It also made us realize that we can move quicker,” he added. It became apparent that the business making decisions and prioritizations are what typically slow technology teams down. But, as Yum started to roll processes out, they were able to do so without the expectation that it would be at 100%, which allowed them to roll out more quickly and incrementally improve as they go. As a result, it was able to pivot its roadmaps quickly as the pandemic unfolded.

According to Davies, “Global pandemic aside, Yum Brands is an old company.” KFC alone is over 90 years old. “This old company with really strong brands is operating at a global scale, highly decentralized and 98% non-equity.”

But technology is used as an enabler for business. It really gives a competitive advantage around the globe. However, Davies is challenged with taking all the data Yum accrues (with over 1 billion consumer records) and mining and using it, which is no easy feat. “Having a top-down buy-in is so critical,” he said.

Davies and Johnson explained that this is achieved by establishing a lot of small, but really quick wins. What’s more? The duo said having a lead data person in your organization is so important. “We’re on a digital journey, but with data being a foundation.”

“Data is a ‘key ingredient’ of our future success,” said Davies (pun intended), which brings us back to his opening statement around ditching the term "data-driven."

“I think it tends to devalue the core of what it takes to build a successful business: creative, product, execution, leadership … We’re here to help make sure the data is captured, is secure, is reliable and it’s accessible, so everybody can use it to help make decision. It’s table stakes,” he added.

And when it comes to finding the right talent, Johnson said, “Look for someone about 70% to 80% ready for the job, and then let them scale all the way to 100%.”