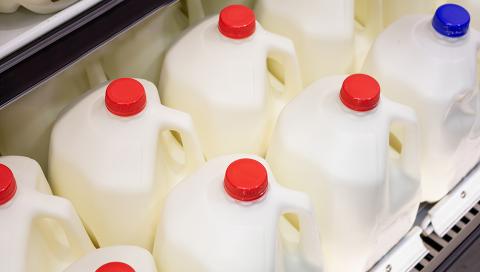 Consumers are interested in using QR codes at retail, a new Cornell study finds, especially when it comes to reducing food waste.

Over the course of the two-month study, consumers were offered the choice of purchasing milk with printed best-by dates or containers with QR codes that displayed the best-by date when scanned with a phone. Dynamic pricing was also incorporated by discounting the milk with shorter shelf lives.

More than 60% of customers purchased the milk with the QR code during the study, which researchers said demonstrated a considerable interest in using the technology.

“This makes digital trends valuable, particularly if they’re combined to really allow us to collect data along the food chain,” said Martin Wiedmann, a Gellert Family professor in food safety at Cornell, to the Cornell Chronicle.

While QR codes are not new, they received a boost in consumer adoption during the pandemic’s need for contactless experiences. The number of U.S. smartphone users scanning a QR code increased nearly 25% between 2019 and 2020, according to eMarketer. About 83 million people are expected to scan this year, with scans reaching nearly 100 million by 2025.

What’s more, consumer are more likely than not to feel that QR codes help with decision-making processes, says Forrester Research, which found in its 2022 study that 61% of U.S. online adults who have used a QR code agree that QR codes on product labels offer excellent depth of information. More than half (55%) said they scan QR codes on products in stores to help them make purchase decisions, and just 29% of consumers who use them reported being often disappointed with the content after they scanned a code.

Looking ahead, the Cornell study researchers noted the QR codes have the potential to communicate with smart refrigerators to inform consumers when they need fresh milk, as well as suggest recipes using ingredients that are nearing the end of their shelf life — combing for a new digital food system infrastructure to reduce food waste.

Dairy products are among the top three food groups with the largest share of wasted food in the United States, according to Samantha Lau, the Cornell doctoral student in food science who conducted the study, with fluid milk accounting for 65% of dairy product food waste because of consumer confusion about when to discard products. This in turn results in nearly $6.4 billion in losses annually, she reported in a related study.

Consumer goods companies are exploring their use across a range of use cases, drawn by both the promise of consumer engagement and an ability to collect valuable first-party data. Mondelēz International, for example, leveraged them in two different food traceability pilots last year. One provided detailed ingredient origin information to U.S. consumers who scanned the code on a Triscuit box, while another in France also leveraged used blockchain technology to trace the journey of Harmony wheat from the field to shelf.

While Forrester reports that consumers find QR codes to be most helpful for redeeming coupons and promotions while shopping, making smart purchase decisions in a grocery store is the second most-cited choice.