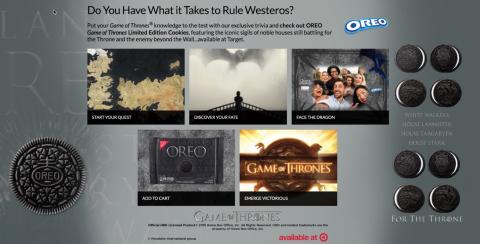 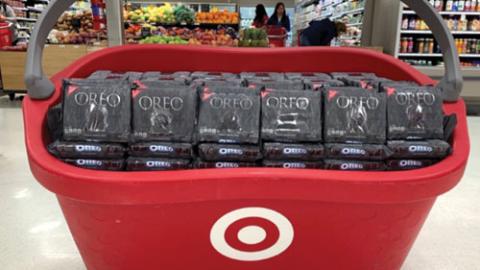 The much-anticipated final season of HBO’s “Game of Thrones” series reportedly garnered an average of 44.2 million viewers per episode. Tying in to the buzz, Mondelez International teamed with Target to run a program spotlighting the manufacturer’s limited-time, licensed Oreo SKU inspired by the fantasy drama.

Mondelez rolled out Oreo “Game of Thrones” (GOT) cookies nationally in April just before the final season kicked off. The Oreo GOT SKU contained four embossed cookie designs, depicting the Night King, the leader of the “Army of the Dead” in the series, and insignias from the show’s “Great Houses” Lannister, Targaryen and Stark. The cookies were packed in mostly black-colored packaging depicting an Oreo logo designed to mirror the show’s main font and logo.

“‘Game of Thrones’ … is one of the most talked-about TV shows of our generation,” says Mondelez’s Jennifer Mason, customer director, shopper marketing. “The hype before the finale was immense. Oreo recognized that an opportunity like that does not come about every day.”

When developing a Target-specific program to promote the GOT SKUs, the brand took into consideration the retailer’s digitally savvy Millennial shopper. “Target’s digital guest is 49% Millennial,” Mason says. “Millennials check their phones on average 250 times per day. With the large viewership of this property and its fan base being on social media a lot, we wanted to provide a fun digital engagement, driving awareness that the product was available at Target.”

Running for seven weeks in April through the series finale in May, the program at Target focused on a two-pronged digital approach, enlisting the retailer’s in-house media company Roundel and Boston-based, shopper-engagement company Breaktime Media, which specializes in creating online content that connects consumers to brands.

Leveraging the media company’s first-party data, the brand worked with Roundel to target the right consumers with banner ads containing a “buy now” call to action that directed shoppers to an Oreo portfolio product page on Target.com. Breaktime Media supported the program by creating an interactive, online content experience, which let consumers play “Game of Thrones” trivia, take a personality quiz, upload images of themselves to depict within a “face the dragon” frame, and click on an “add to cart” button to instantly add an Oreo GOT SKU directly to their Target.com shopping cart.

In stores, Oreo GOT SKUs were merchandised near GOT apparel, within aisles and on Target’s merchandising units that resemble a giant version of the retailer’s red shopping basket. “Oreo cookies can be an impulse purchase,” Mason says. “It’s on many lists, but displays were used to drive incremental purchase. These displays helped to garner further excitement for Target [shoppers], leading to even more consumers snatching them up.”

The program proved to be successful, driving the brand’s highest online sales on one SKU at Target. “During the campaign, the Oreo GOT limited-edition cookies on Target.com sold 2½ times that of all of the other Oreo cookies on Target.com combined,” Mason says. “This was the number-one-selling SKU of all time in Target’s snack department … for a launch week.”

The Breaktime engagement program also broke “almost every benchmark,” according to Mason. “Everything from overall engagement to uploading photos, social sharing and add to cart was done at phenomenally high rates,” Mason says.