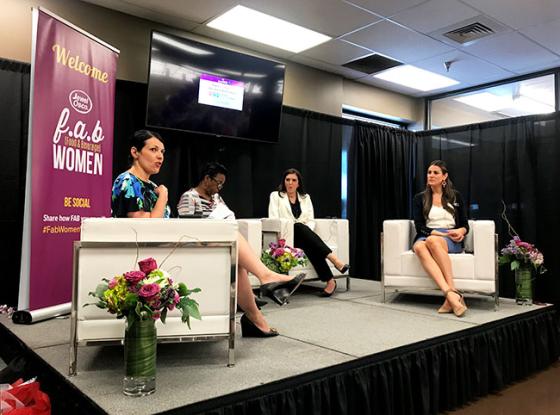 Staged with help from longtime partner and marketing agency GT Universe, the event served to tell the stories of women "making it" in a male-dominated field that is the food and grocery industry, and empower others to do the same. GT Universe has also helped Jewel pull off events such as its annual Earth Month and Italian heritage celebrations.

An email ad, a full-page feature in Jewel’s June Big Book of Savings catalog, and multiple social media updates using the hashtag #FabWomenWithJewel supported the f.a.b. women event. At the event store, an outdoor banner promoted the event, while purple and pink balloons at the entrance spelled out “FAB.” GT Universe additionally created a microsite for the event (FABwomenwithjewel.com) with details including sponsors.

Women’s Inspiration & Inclusion Network (WIIN) also helped power the event, and Jewel made a $1,000 donation to WINGS, a nonprofit that provides resources and assistance to adults and children fleeing domestic violence.

Other FAB women events will be held at three Jewel-Osco locations in the Chicagoland area on June 26, 27 and 28, excluding the panel discussions.

NOTE: Path to Purchase Institute members can view more images from the event at p2pi.org. Members also have access to more than 2,700 images and 200 articles about marketing and merchandising activity at Albertsons, along with a full Retailer Profile outlining the chain’s operations and strategies.