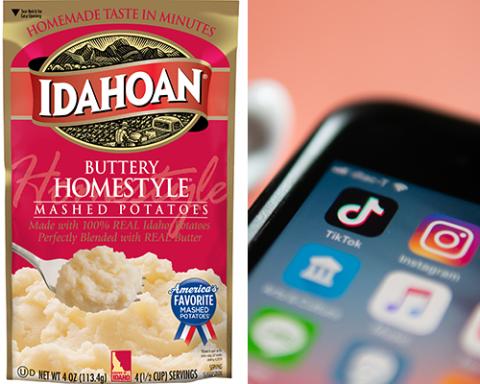 In an effort to better connect with Gen Z consumers, Idahoan Foods dove into TikTok with a campaign that not only educated them about how to enjoy its products, but also developed a unique music beat and choreographed dance known, naturally, as “the mashed potato dance.”

Part of a two-pronged strategy spearheaded by Idahoan Foods marketing specialist Kiersten McFarland, the food manufacturer first engaged TikTok users with a culinary challenge known as the #idahoanmash. It selected its Flavored Mashed Potatoes product to highlight, said to be its product line Gen Z has gravitated toward the most.

Teaming with lifestyle-focused influencers who showed off the ways they enjoy the products, the #idahoanmash campaign resulted in 7.2 million views on TikTok, Ryan Ellis, VP of retail marketing and business development, tells CGT.

The company followed up with a dance challenge known as the #mashoutchallenge, intended to demonstrate a more fun side of the brand. Idahoan leveraged TikTok analytics to identify trending songs on the platform and then worked with such influencers as Madi Monroe, Gabby Morrison and The Fergie Twins to develop the #mashoutchallenge, in which they created their own versions of the dance while amplifying the company’s Buttery Homestyle Mashed Potatoes.

The #mashoutchallenge resulted in 4.3 million views on TikTok.

Both campaigns were components of the company’s Project PULL marketing strategy, a cross-functional marketing effort led by Idahoan director of retail marketing Wes Myer that intended to compel consumers to “pull Idahoan product from their pantries.”

Ever eat something so good it makes you wanna dance? That’s how Idahoan mash makes us feel! Try the ##mashoutchallenge @idahoanfoods ##newchallenge##ad

As part of this, the company implemented purchase decision targeted digital and video ads in addition to the TikTok challenges. It also distributed 125,000 coupon and recipe mailers to consumers in key markets and sent 300,000 food samples to households in retention-focused areas.

In total, the TikTok campaign resulted in over 200 pieces of user-generated content and 4,500 added Idahoan Foods followers. The campaign drove over 14 million total views across the campaign and an engagement rate that exceeded 20%. Project PULL as a whole was very successful, says Ellis, driving a 12.6% buy rate increase to date.

Idahoan was drawn to TikTok in its efforts to better engage with Gen Z consumers, who tend to be new for the brand, he notes.

“Inspired by the creativity we see on TikTok, we felt this was a platform where we could interact with this age group in an engaging and attention-grabbing way,” Ellis says, adding that it enabled them to showcase the brand in a fun and lighthearted way.

"All of our Project PULL efforts, including the global recipe strategy, encouraged us to think outside of the box in order to feature our products in attention-grabbing — and even, at times, unexpected — ways,” he notes.