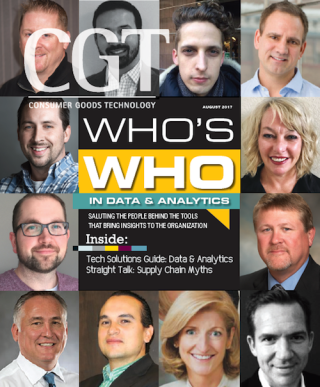 In 2014, my husband came home from work with an article he clipped out of The Wall Street Journal titled, “Get Familiar with Big Data Now—or Face ‘Permanent Pink Slip.’” He showed it to me, I skimmed it (probably smiled and nodded), and then moved on with the many other things I was most likely multi-tasking.

Later, when I went into his home oﬃce, I noticed the article hanging on the wall in front of his desk. At this point, the term “big data” had hit the industry and spread like wildﬁre — so much so that when I saw the article, I’m sure my eyes glazed over and I thought he was “geeking” out like a tween, a teeny bopper or groupie (feel free to insert any word here, depending on the era of your upbringing), putting up a poster of his or her favorite boy band or rock band Little did I know that he was onto something.

That same year, CGT joined forces with sister brand RIS News to launch the ﬁrst Retail & Consumer Goods Analytics Summit. The inaugural Summit went well. By year two, attendance doubled. That same year (2015), I was covering the event and came across Linda Burtch, one of the speakers on our roster.

I thought her name sounded familiar, but dismissed it. When I ﬁnally had the chance to meet her in person, it dawned on me. Admittedly, it was my turn to geek out as I told her how her article was hanging on the wall in my house, and how my husband and I were big fans of her work. (Don’t worry, I think I played it cool.)

Just a few short years later, as I was helping to compile the list of noteworthy executives for this month’s “Who’s Who in Data & Analytics” feature, I couldn’t help but wonder why I became so “star struck” over an executive recruiter specializing in quantitative, analytic and marketing professionals?

Here’s why: According to a Northeastern University article from 2016, we produce the data equivalent of 90 years of HD video … EACH DAY. The most daunting challenge about this is ﬁnding those “unicorn” interpreters: the executives who can look at the data (sometimes create a query here and there), see an insight to act upon, and then be able to clearly explain it to upper management (who probably understand the business, but not the science and technology being used to strategize).

That’s what this August issue is all about. Not only do we present a list of talented individuals who live and breathe data and analytics every day, but we also oﬀer a variety of tools that can help their eﬀorts in our 2017 listing of “Data & Analytics Solutions,” part of our ongoing Technology Solutions Guide series.

And, even though this month’s Straight Talk is focused on debunking myths surrounding supply chain, it appropriately states two facts that our data and analytics experts can get behind: 1. Delivering and synchronizing data can be streamlined with the right systems and processes in place, and 2. One of the essential ingredients for success includes a C-level executive champion to align the organization.

And so, to whatever you want to call them — executive champions, superstars or even unicorns — I say keep on being the rock stars you are. We’re your biggest fans!

To read the rest of CGT's June 2017 issue, click on the article links below: