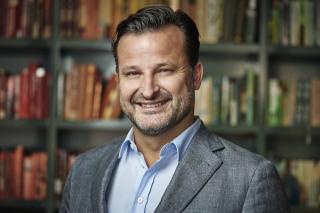 Are Traasdahl is the CEO of Crisp.

Before founding Zest Tea, a high energy, caffeinated tea brand, CEO James Fayal was a financial analyst. He learned two important lessons in that role: how to sustain long hours at work and how to use data to grow a business.

Putting in long hours meant finding a healthy way to stay alert and focused throughout the day. And when office coffee just didn’t cut it, James launched his own line of high-octane teas, starting as a direct-to-consumer business in 2014.

As the brand grew and Zest Tea began selling through retail stores, it became harder to run the company as a data-driven business.

“You get spoiled with data in direct-to-consumer and then you move to retail and realize.... ‘I don't have any data’,” Fayal recalls. “I won't know anything for six months.”

Using his analytics background, Fayal resolved to build reports himself, trying to get signals on how the company’s activities translated on retail shelves. Not only was this incredibly difficult, but it kept him in the role of analyst instead of focusing on his responsibilities as a CEO. It wasn’t a long-term solution, so he looked for a partner to take on this role and found Crisp, a programmatic commerce platform that can efficiently analyze retail buying trends and point food and beverage brands toward the ideal data-driven marketing strategies.

Having a data-driven promotional strategy was particularly important to Fayal. Just like with some caffeinated drinks, he didn’t want the boost that comes from promotions to be a spike-and-crash.

“You’re encouraged to do all kinds of retail promotions as a growing brand...but what’s the long-term effect coming out of those promos,” he wondered. “You need data to make those decisions — to figure out if you’re attracting the right type of customers who will actually stick around.”

Now, after the Zest team has designed their promotions, the team uses Crisp to track fill rates at each distribution center to prevent out-of-stocks. Zest also uses Crisp to eye long-term trend lines and manage the product mix accordingly across thousands of retail locations.

In one example, they spotted that a slower moving SKU was actually a big hit in the Northeast. Instead of cutting the product, they focused their growth efforts in a regionally specific way.

“Who knows how long it would have taken us to find that out, but it was rapidly available to us via Crisp,” Fayal explains.

In addition to saving the team dozens of hours per month combing through raw data, Fayal says that Crisp has democratized data across the company. Now, every team member is armed with sophisticated insights to make better sales, marketing, and operations decisions. Given how expensive and time-consuming data analysis can be, Fayal says this wouldn’t normally be possible for an emerging brand: “With Crisp, we have the data access of a much larger company.”

Are Traasdahl is the CEO of Crisp