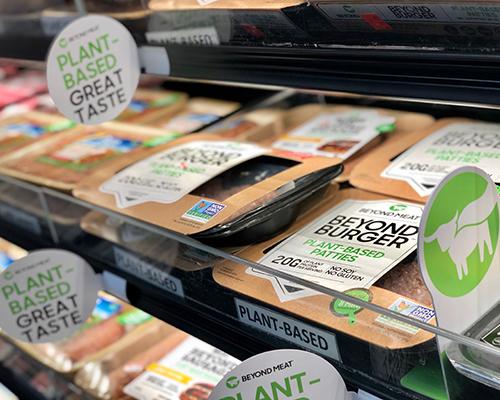 The global plant-based alternatives market, meanwhile, has the potential to reach $162 billion in the next decade.

Beyond Meat made a significant move in its international expansion strategy with the lease of an R&D center in Shanghai, China — the company’s first such dedicated facility outside of the United States.

The news comes on the heels of the plant-based food company’s appointment of Tyson Foods and Mars veterans into key leadership roles.

Beyond Meat reported net revenue of $106.4 million in its third quarter, a 12.7% year-over-year increase. Growth was primarily attributed to increased sales to international customers, which grew 142.5% vs. the prior-year period thanks in part to distribution expansion and accelerated orders.

The global plant-based alternatives market, meanwhile, has the potential to reach $162 billion in the next decade, according to Bloomberg Intelligence, which is up from $29.4 billion in 2020.

Beyond Meat’s Shanghai R&D center, which is expected to open in the first half of 2022, will serve as an innovation hub for its scientists and researchers to develop products catering to customers and consumers in the Asia-Pacific region. In addition to a pilot lab, the facility will also have a test kitchen and sensory testing capabilities — all expected to help it develop and iterate products while increasing speed to market.

Dr. Dariush Ajami, Beyond Meat chief innovation officer, said the new Shanghai R&D team, currently in development, represents the next leg in its journey to become a global protein company.

“This new resource will enable us to more precisely serve the palate of the Chinese consumer and contribute directly to the culture’s delicious cuisine,” he noted, “while joining our global effort to deliver plant-based meats that are indistinguishable from, healthier than, and over time, priced at parity with their animal protein equivalents.”

Beyond Meat entered China last year and has since opened a new manufacturing plant in Jiaxing — its first end-to-end manufacturing facility outside the United States — with the intent to scale distribution and increase operational efficiency. Both the new R&D center and manufacturing plant will combine to help the company bring localized products to market more efficiently for customers in Asia.

Ramsey and Adcock are expected to be instrumental in both growing and driving efficiencies throughout the company’s operations, supply chain, and manufacturing.