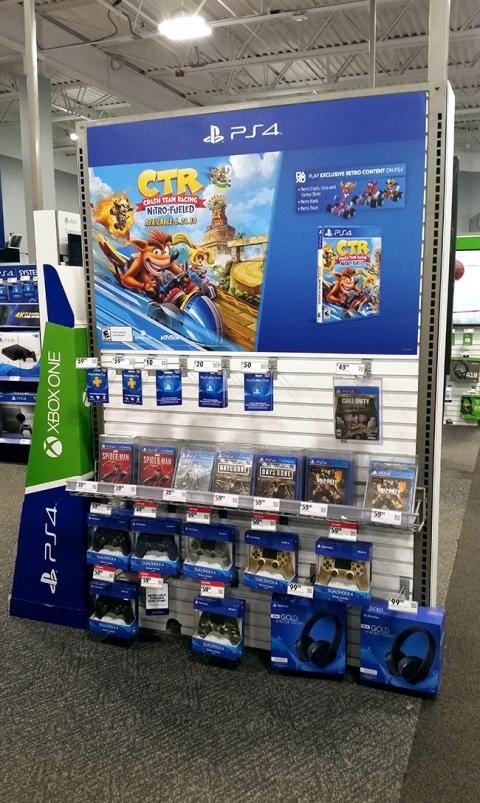 Best Buy recently put its weight behind the June 21 launch of Activision's Crash Team Racing Nitro-Fueled video game with plenty of support ranging from in-store demos and displays to a preorder bonus and digital support.

Available for Sony's PlayStation 4, Microsoft's Xbox One and Nintendo's Nintendo Switch, CTR Nitro-Fueled is a remastered version of the original 1999 version, which includes new "karts" and tracks, modern graphics, online play capabilities, and the ability to customize characters and karts, in addition to everything that came in the original game.

Ahead of the game's release, Best Buy dangled a preorder bonus of a PlayStation-themed kart sticker pack (for PS4 only) via display and top-of-page ads running within bestbuy.com. Amazon was the only other retailer offered the same preorder incentive. In addition, all preorders of the game – regardless of retailer – received an “Electron Skins Pack” containing skins for characters Crash, Coco and Cortex, according to gamespot.com.

Following the release, the PS4 skins were still available, at least at Best Buy. Endcap headers in stores touted the game and the “exclusive retro content on PS4," which includes the aforementioned skins as well as retro karts and a track. The game is also stocked in-aisle, boosted with similar in-line signage.

As it has done in the past for certain video game releases, Best Buy additionally promoted the new game by hosting Crash Team Racing Nitro-Fueled  PS4 demonstrations on July 13 and 14 in select stores from 1-5 p.m. A store locator on bestbuy.com’s “Video Game Release Date & Events” hub promoted the demos.

NOTE: Path to Purchase Institute members can view more images of new product launches from Best Buy at p2pi.org. Members also have access to more than 2,600 images and 300 articles of marketing and merchandising activity at Best Buy, along with a full Retailer Profile outlining the chain’s operations and strategies.