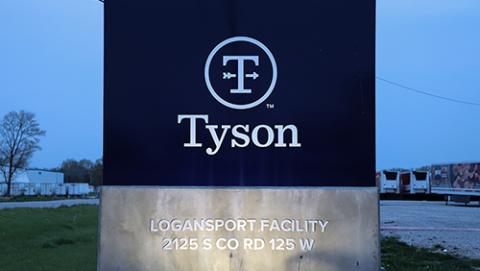 Tyson's investments include digitization and advanced analytics within its prepared foods.

First previewed last year, Tyson expects the program to result in about $1 billion in recurring savings by the end of fiscal 2024. In addition to capacity expansion, including the opening of 12 new factories, a significant portion of the funds are being allocated toward automation and technology.

The company has moved from a project-to-project approach to a more programmatic one, King said, in which they’re tackling common issues across its production footprint. This includes such things as chicken deboning and other difficult roles.

“We are investing aggressively in automation and technology to help us address some of the most hard-to-fill roles,” said King. “This is not a series of projects, but is a well-planned program with automation, designed to use common designs and equipment across our plants to optimize cost, maintenance, and asset utilization.”

The No. 9 consumer goods company is also optimizing the mix and allocation of its private, dedicated, and third-party transportation fleets to both offset inflation and provide better on-time deliveries.

And it continues to expand its direct shipment program, reducing miles driven and product touches in its supply chain, said King. These changes have contributed to Tyson being on track to deliver $300 million to $400 million of savings in fiscal 2022.

The opening of the dozen new plants is progressing, and the company last week broke ground on a $355 million bacon production facility in Bowling Green, KY. The 400,000-square-foot facility with robotics and other automation is expected to open late next year.

Tyson reported net sales of $12.93 billion in its fiscal first quarter, up from $10.46 billion in the prior year period.

Ben Bienvenu, analyst at Stephens equity research, cited Tyson’s improving operational excellence in the chicken business as one reason for its strong performance, according to Barron’s, as well as more efficient plant operations.