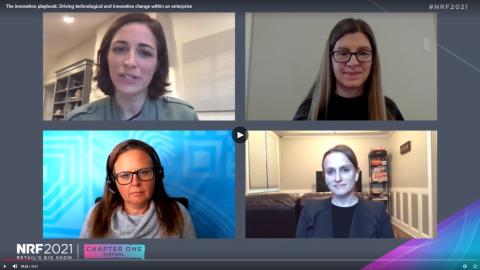 Although executives from PVH Corp. and GS1 gathered to discuss "The Innovation Playbook" at a recent NRF 2021 session, the crux of the conversation ended up determining that such playbooks should be periodically tossed out in order to achieve true invention.

PVH Corp., the No. 64 consumer goods company that includes such brands as Calvin Klein, Tommy Hilfiger and Van Heusen in its portfolio, began to formalize how it defines innovation about five years ago, putting together several different types of innovation in a center of excellence.

This shift was a challenge for the apparel company, admitted Nadolny, who serves as SVP, business strategy and innovation. As a result, the company for the last year and half has been changing the structure of how it manages innovation in order to ensure it fits to its culture and how it’s executing it within the divisions.

By doing so, it’s learned that putting innovation closer to the business user and the experts within each space is more productive. It enables them to move more quickly and better understand its ability to execute.

While COVID-19 has altered PVH’s innovation priorities, it hasn’t disrupted its overall roadmap. As with other CG companies, the pandemic instead accelerated projects to come to fruition far earlier than originally intended. Within this, it’s more urgently prioritizing such consumer connection and digital automation tools as AI in order to help further business processes and planning needs.

It’s also looking at omnichannel solutions to engage with consumers while removing friction during the buying process.

“It really just is about making sure that we are not getting stuck in what we said we were going to do in the next six months versus the next five years,” said Nadolny, “and really changing those priorities and reacting to the business needs.”

Nuce, SVP of corporate development at informational standards organization GS1 US, was able to share perspective from a company that collaborates with both brands and retailers, describing the biggest barrier for both sides  as being legacy thinking.

“The barrier [is] being of a single mindset, working to common goal, assuming positive intent, and I think all of those things can really foster a good innovation culture internally and, eventually, for your customers.”
Melanie Nuce, GS1 US

“Bringing people along for the ride is [important], especially in a year where so many things have impacted all of us,” Nuce said. “I think for us the barrier [is] being of a single mindset, working to common goal, assuming positive intent, and I think all of those things can really foster a good innovation culture internally and, eventually, for your customers.”

While both brands and retailer may seek to develop a standardized innovation playbook for their teams, it’s still important that these guidelines get tossed out every so often in order to maintain true innovation, the group agreed. Trying to adhere to a blanket playbook risks companies losing the cultural nuances that drive innovation forward, said Nadolny.

Instead, it’s more vital that teams contain intellectual curiosity and a strong desire for collaboration to push people out of their comfort zones.

And while it’s often viewed as somewhat of a cliché, failure is indeed a crucial component of driving innovation. It not only enables teams to explore what might be possible, but it also demonstrates to boards and stakeholders that innovation teams aren’t simply chasing every shiny object. Instead, they have to visibly indicate when it’s time to leave an idea behind.

Cheryl Friedman, Lowe’s Companies’ VP of Lowe’s Innovation Labs, provided the retail viewpoint during the panel. For Lowe’s, developing innovation focuses on defining, testing and creating what's next for home-improvement retail. As part of this, it leverages such emerging technologies as AR, VR, exoskeletons and robotics in order to better connect with customers and empower its associates.

As with many corporate innovation hubs, Friedman cited scaling and integrating back into the enterprise as key challenges for the company. To navigate this, Lowe’s altered its model to establish strong connections between the organization in order to develop scalable concepts that drive value for the entire enterprise.

This org structure is Lowe’s secret sauce, Friedman said, comprised of three distinct labs: Technology, which focuses on exploring the far future; Development, which focuses on scaling; and Ecosystem, which sits in the middle and looks at external partners to help fast-track solutions and develop new capabilities.

During the pandemic, Lowe’s leveraged its innovation teams to accelerate plans for curbside pickup, and developing apps within 24 hours to monitored in-store traffic.

It also launched Lowe’s for Pros, a digital jobsite platform that leverages computer vision and augmented reality. Used by its professional consumers, the platform enables them to remotely connect with their own customers around worksites.