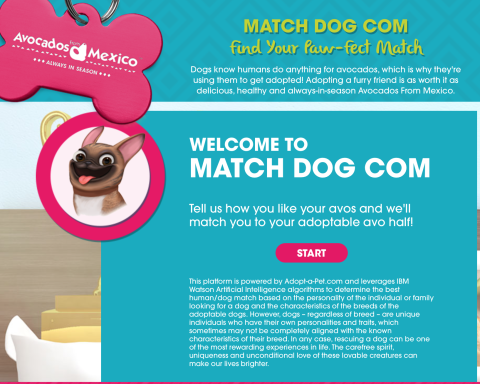 Avocados From Mexico is hosting an IBM Watson-infused digital experience as part of a seasonal campaign that will culminate in the brand’s fifth annual Super Bowl TV spot on Feb. 3.

Dubbed “Anything For Avos,” the effort centers on a dedicated digital platform containing more than 20 interactive content activations (including recipes) that underline the value of Avocados From Mexico.

"Our idea for this year's Big Game campaign is that avocados are so desirable that people will go to great lengths for them and, as our fans have come to expect, we're displaying this with our classic humor," said Ivonne Kinser, head of digital for Avocados From Mexico. "This website will have many opportunities for people to engage with our brand and have fun with the idea of dogs being able to communicate."

Meanwhile, the "Match Dog Com" program seeks to help consumers interested in adopting dogs find ideal matches in their areas. The IBM Watson-powered platform makes the matches based on answers to questions regarding lifestyle preferences. Avocadoes From Mexico worked with dog trainers and IBM to establish the algorithms needed to identify ideal breeds as well as dogs available for adoption from Adopt-A-Pet’s robust national database.

Elsewhere, the brand released a 15-second teaser of the Super Bowl spot, which stars Broadway/TV star Kristin Chenowethhelping to deliver the message that “Avocados From Mexico are Always Worth It.” The full spot will air during the second quarter of the game’s broadcast on CBS.

Avocados From Mexico is a wholly owned subsidiary of the Mexican Hass Avocado Importers Association, which was formed to drive advertising, promotion, public relations and research for all related stakeholders. Under agreements, MHAIA and the Mexican Avocado Producers & Packers have combined resources to fund and manage Avocados From Mexico, with the intent of providing a focused, highly effective and efficient marketing program in the U.S.