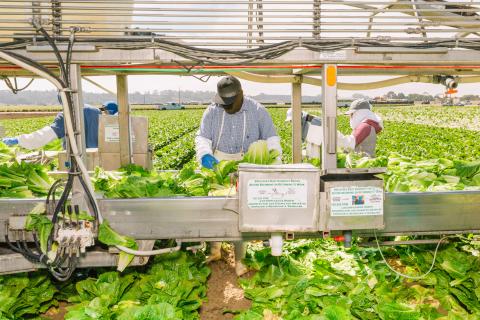 Walmart will require all suppliers of leafy green vegetables to its Sam’s Club and Walmart stores to upload data to its blockchain by September 2019. The announcement comes after the retail giant spent more than a year working with IBM on a food safety blockchain initiative.

Called the Food Trust Solution, the new technology digitizes the produce supply chain process using the IBM Blockchain Platform. This makes the supply chain traceable and transparent. Each node on the blockchain could represent an entity that has handled the food, making it easier, faster and more precise to trace an infected produce batch back to a particular farm.

“Our customers deserve a more transparent supply chain,” said Frank Yiannas, Walmart’s vice president of food safety. “We felt the one step up, one step back model of food traceability was outdated. This technology-supported move will greatly benefit customers and transform the food system, benefitting all stakeholders.”

Traceability is particularly important in produce. Retailers generally use multiple suppliers per category to cope with fluctuations in demand, crop size and seasonality. They also use myriad shippers, distributors and other “middlemen.”

Without blockchain, it takes about seven days to trace the source of food. Blockchain can do it within 2.2 seconds, significantly reducing the likelihood that infected food will reach consumers.

Currently, most supply chains are bogged down in manual processes. This makes it difficult and time consuming to track the origins of products like the E. coli-infected romaine lettuce that affected the industry last spring.

Suppliers do not have to be blockchain experts to adopt the technology, according to Walmart spokesperson Molly Blakeman. They simply need an internet connection and know how to upload data to the blockchain application. Currently, suppliers keep records using everything from basic paper and Excel spreadsheets to sophisticated ERP systems.

“IBM will offer an onboarding system that orients users with the service easily,” added Blakeman. “Essentially, suppliers will need a smart device and Internet to participate.”

In addition to the blockchain mandate, Walmart is requiring that suppliers adhere to the Global Food Safety Initiative, an internationally recognized set of food safety standards.

According to a report from Global Market Insights, the blockchain market is expected to surpass $16 billion by 2024. Digital currency and retail supply chain (particularly fresh food and apparel) are among the biggest areas of application.

Other retailers are also exploring or implementing blockchain:

More information on these blockchain activities can be found at sister publication RIS News.