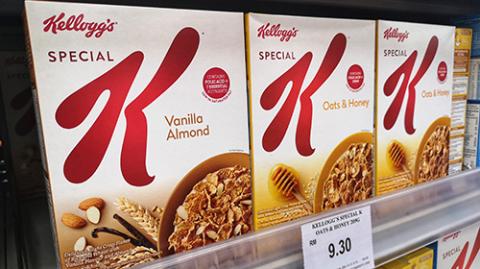 Kellogg's is investing in a $45 million reorganization of its North American supply chain.

Lance, presently VP of Kellogg’s North America supply chain, has been with the No. 48 consumer goods company for 25 years, rising up the ranks from his early roles as a production supervisor and plant manager. Named VP of snacks engineering in 2011, he later played a key leadership role in optimizing Kellogg’s supply chain organizations in Latin America and Europe as the VP of supply chain for each region.

He’s had his current role since November 2019.

Kellogg’s, like many consumer goods companies, has grappled with myriad supply chain challenges amid surging sales during the pandemic — issues that were compounded by both a labor strike and a fire at a cereal plant last year. The company is investing in a $45 million reorganization of its North American supply chain to improve productivity, shifting production to more optimal lines across its network.

Hirst, who has been with Kellogg’s for nearly four decades, called his successor a natural fit to lead the global supply chain organization.

“He has proven through his extensive experience — including over the last two years when he guided our [Kellogg’s North America] supply chain through the most challenging supply and cost environment in memory — that he is highly capable of leading complex organizations that drive successful execution and prioritize the safety of our people,” Hirst noted.

The retiring Hirst joined the company as a food technologist at the Springs, South Africa, plant in 1984 and has served in his current role since 2011. In praising his impactful career, Kellogg CEO Steve Cahillane pointed to his work in transforming the supply chain through the Kellogg Work System (KWS) work team structures, as well as driving its digital transformation.

Lance will report to Cahillane, with his successor to be announced.