COVID's ramifications on food production came sharply into focus with one succinct statement: “The food supply chain is breaking.” 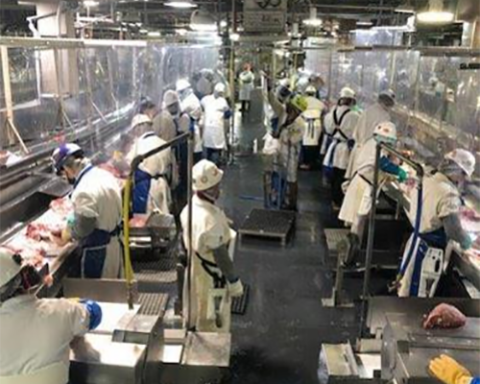 Workstation barriers at the Tyson plant in Logansport, IN

As the spread of COVID-19 continues its march of disruption across the globe, its ramifications on food production came sharply into focus with one succinct statement: “The food supply chain is breaking.”

Included within a letter from John H. Tyson — published in several national newspapers on April 26 as well as online — the Tyson Foods chairman highlighted the efforts employees were making to keep production running, the steps the company was taking to keep them safe, and the vulnerabilities of the food supply chain. If the themes rang familiar, it was because similar sentiments were made by Smithfield Foods a few weeks prior.

In addition to warning of limited availability of its products in grocery stores because of facility closures, Tyson also highlighted the food waste taking place.

“Millions of animals — chickens, pigs and cattle — will be depopulated because of the closures of our processing facilities,” he wrote. “The food supply chain is breaking.”

Tyson Foods paused operations at plants in Iowa, Indiana, Nebraska and Washington in April after hundreds of its employees were infected with the coronavirus. While some have resumed at limited capacity, others remain closed as the company works to complete employee testing.

During an investors call this week, Tyson Foods president Dean Banks said the lower levels of productivity and higher cost of production are expected to continue “in the short term until local infection rates begin to decrease.”

Tyson isn’t the only manufacturer closing plants — or pausing operations for deep cleaning and then quickly resuming — with Smithfield, Cargill, Kraft Heinz and Conagra also among them. The Centers for Disease Control and Prevention said on May 1 that 115 meat and poultry processing facilities in 19 states had reported COVID-19 cases in their employees; of the approximately 130,000 employees, 4,913 cases were reported and 20 people had died.

Jayson Lusk, head of Purdue University’s agricultural economics department, told CGT that U.S. beef and pork packing plants were running 40% below production levels vs. this period last year because of the plant closures and the slowdowns resulting from the need to space out plant employees.

“Even if closed plants are able to get operational, they'll likely be run below capacity,” he said. “It is important to know that the challenge relates to the relatively concentrated nature of the packing industry. The 15 largest pork plants process just under 60% of all hogs in the U.S.; the 10 largest beef plants process over 60% of all cattle in the U.S.”

“Thus, when even one plant goes down, they are large enough to cause disruptions in national meat and livestock markets,” he noted.

While President Trump signed an executive order on April 28 in an attempt to keep production running — declaring that such closures threaten the national meat and poultry supply chain, thus “undermining critical infrastructure during the national emergency” — the path to which it will be carried out while keeping employees safe remains unclear. For now, the chain remains strained.

“We are tooled up for an economy where people eat a significant portion of their meals in restaurants, and where the supply of labor is healthy and could work easily in close proximity to one another,” Dr. David R. Just, a professor at Cornell University’s College of Agriculture and Life Sciences, told CGT. “The system is not particularly nimble, and it will take significant effort to adjust to the new demands and the health issues of the labor.”

"Without being able to resolve questions about how long the current situation lasts, it is hard to know how to invest in a response."
Dr. David R. Just , Cornell University

As a result, meat prices are swinging dramatically and will likely similarly impact other parts of the food system, he said.

“The big problem in my mind is the question of how long the current situation lasts,” he noted. “The food industry faces significant risk in retooling, or even in not retooling. These efforts are costly, and if the economy and the restaurants are going to reopen soon, it may not be worth it in the long run.”

“Often when we see markets in turmoil, it is due to a fundamental lack of information about the future. Without being able to resolve questions about how long the current situation lasts, it is hard to know how to invest in a response,” he added.

While Just anticipates meat shortages, he expects them to last only a few weeks.

“There could be other foods in similar circumstances. But the supply and manufacturing timelines are different for different foods, and thus the shortages are going to be intermittent and probably isolated to a group of products at any one time,” he said.

Doug Baker, VP, industry relations at FMI – The Food Industry Association, said that rather than shortages, consumers may be experiencing sporadic unavailability of certain high-demand items.

“We can all rest assured that there is enough retail supply of food products and, according to the U.S. Department of Agriculture, there are no nationwide shortages of meat in this country,” he said, citing IRI statistics reporting that meat sales are up 17% at stores.

“We know shoppers are getting what they want — and at a scale our food system has historically never witnessed,” Baker said.

As consumer goods companies grapple with these production challenges, most of whom CGT spoke with expected automation to play a larger role moving forward.

“Long term, there will almost certainly be efforts to increase automation and reduce reliance on labor,” said Purdue University’s Lusk. “Unlike manufacturing a car or a refrigerator, animals come in different shapes, sizes and colors, which makes automation more difficult, but not impossible.”

“Our businesses have changed more in the last five weeks than the last five years,” said Baker. “[The] supply chain innovations planned for several years out will be fast-paced now and will catapult us into the near term.”

He cited omnichannel solutions as an example of a resolution that’s become more tangible than just six months ago. “The idea that stores could be built for pick-up only is a very real format this year. Automated warehouses, like what we’ve witnessed with Ocado in the U.K., could be a new normal in our industry.”

As for expectations on how long this manufacturing disruption will occur, Just predicted the disruption would be dramatic — but not ubiquitous. “In other words, some of the big food suppliers are going to retool for a COVID world, and some will make only minor investments and changes,” he said. “As the future comes into view, there will be winners and losers — and those who chose poorly will likely face significant periods of shutdown or holdups in their supply chain.”