Albertsons Cos. reprised its annual “Stock Up Sale,” this year tying the promotion to its Gas Rewards program.

The points are redeemable at gas stations for up to 20 cents off per gallon. Participating stations include Royal Dutch Shell, Chevron, Sunoco LP, Texaco and ExxonMobil (depending on the banner/market), as well as Safeway’s own branded fuel centers.

As it did during its anniversary sale earlier in the year, Albertsons also ran a corresponding sweepstakes awarding free groceries for a year (in the form of store gift cards totaling $5,200). Consumers entered from Oct. 4-19 by sharing a photo depicting two eligible SKUs on Twitter or Instagram with the hashtag #StockUpSale2017, or via a promotional entry page. Sacramento-based FleishmanHillard handled. The retailer also enlisted the support of various bloggers to plug the sweeps and Stock Up Sale on Twitter and Instagram.

This is the third campaign the retailer has married to its Gas Rewards program in the last five months.

According to a recent U.S. Securities and Exchange Commission filing, more than 11 million shoppers, or 21% of Albertsons' customer base, are enrolled in its loyalty programs, and these shoppers “demonstrated greater basket size, improved customer retention rates and an increased likelihood to redeem promotions offered in our stores.”

This number includes members of the Just for U loyalty program and the MyMixx digital coupon platform, which were both retained when Albertsons and Safeway merged in 2015.

Following a steady expansion last year, more than half of Albertsons’ 2,300-store fleet now participates in the Gas Rewards program, giving it potentially the broadest reach and making it the easiest to leverage for enterprise-wide promotions.

Retail Execution
A Look Inside Albertsons' Latest Flagship in Idaho 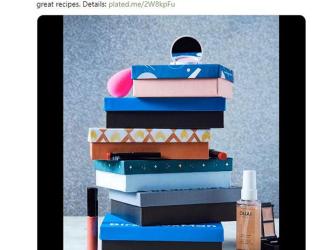