Rockstar 'Gears' Up at Walmart

Rockstar 'Gears' Up at Walmart

Rockstar earned upfront merchandising at Walmart by giving the mass merchant an exclusive overlay to a national promotion tying in to Microsoft Studios' Oct. 11 release of Gears of War 4. 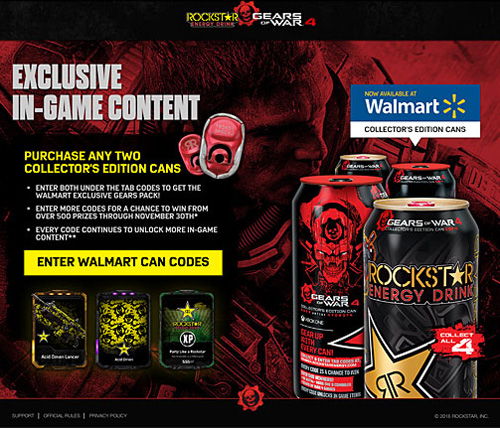 From Oct. 1 through Nov. 30, participants also earned two extra entries into a national sweepstakes when they redeemed their codes. The sweeps awarded 18 grand-prize packages comprising a Gears of War limited-edition bundle with Microsoft Corp.'s Xbox One S console and the Gears of War 4 game plus a 4K 60-inch TV; 61 first-prize winners got an Xbox One S console, the game and a HyperX Gears of War 4-themed headset; and 488 second-prize winners received the game in the form of an exclusive digital code to download an electronic version. Atlanta-based Brandmovers handled.

Shoppers can continue to redeem codes to unlock in-game content through Dec. 31.