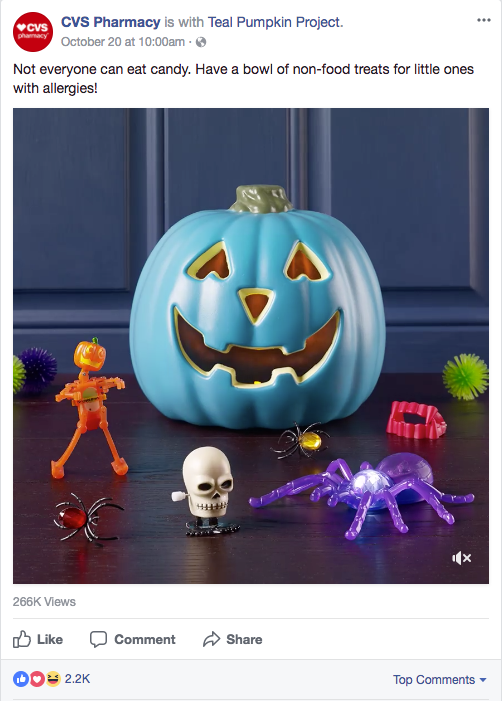 CVS/pharmacy gave its support to children with food allergies this Halloween.

The retailer partnered with the Teal Pumpkin Project, a nonprofit initiative from Food Allergy Research and Education (FARE), to encourage consumers to stock non-food items for trick-or-treaters with allergies, and display a teal pumpkin outside their house to let parents know that such treats are available.

In select stores, CVS stocked official merchandise from the nonprofit, including plastic teal jack-o-lanterns and window clings. Shelf signs explained the goal of the project, while teal category markers identified non-edible goodies such as glow sticks and stickers.

Multiple features in weekly circulars during October plugged the effort and directed consumers to tealpumpkinproject.org. An Oct. 20 Facebook update and an ad in an Oct. 9 email supported. Several Facebook updates from the Teal Pumpkin Project recognized CVS as one of its partners along with other retailers including Ahold USA and Albertsons Cos.’ Market Street.

CVS used an Oct. 27 Facebook update to again plug the project while also touting the private-label epinephrine auto-injector for individuals with life-threatening allergies that the retailer released earlier this year to much praise.

Endcap headers and ceiling signs employed messages such as “scary sweets” and “a monster’s guide to Halloween.”

Online, CVS used Facebook and Twitter updates as well as emails to ExtraCare loyalty cardholders to plug “buy one, get one” deals on candy from Hershey and Mars Inc., as well as discounts on Halloween costumes and decor. Weekly circular features communicated the same deals.