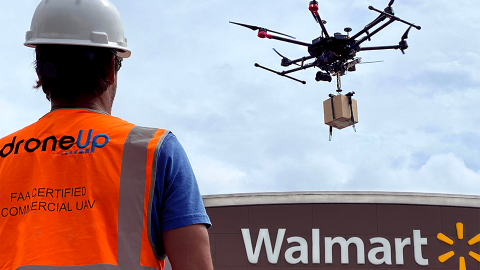 Expect drones to play a more prominent role in the last mile, including through goods retrieval, as retailers like Walmart pursue faster and more sustainable fulfillment alternatives.

Walmart, which has conducted about 6,000 drone deliveries thus far, is expanding its drone operations to an additional 34 hubs, bringing the retailer to 37 hubs in seven states and 26 different municipalities. David Guggina, Walmart executive VP, supply chain operations, estimated drone demand will follow an S curve as the technology ramps up in the United States and regulations catch up to propel it forward.

“You’re going to see exponential growth, and then it'll find its place as a modality within our supply chain and level off,” he said during a panel at the National Retail Federation (NRF) trade show in New York on Monday.

Beyond meeting consumers’ heightened expectations, the retailer also views drones as providing a more sustainable fulfillment alternative than trucks, and delivering goods to customers is just one way they expect to utilize them. They’re also exploring leveraging drones for the retrieval of goods, and, as part of this, is working with multiple partners that utilize mailboxes.

“You can imagine a world where you have a return that comes back to a Walmart Supercenter that's picked up by a drone because that drone was delivering pharmaceuticals to your home or delivering lunch for you and your family,” said Guggina.

Walmart’s drones can currently carry roughly 10 pounds of goods — the next iterations will up this to 15 pounds while also tripling the amount of cubic space they can carry — and there are currently more than 100,000 Walmart SKUs deployable via drones. Products that can be returned faster can then go back into the supply chain more quickly, while leveraging multiple deliveries holds the potential to “change the fabric of retail,” he noted.

“I imagine a world in the future where the vast majority of our drone hubs are off the grid completely and utilize solar power from the roofs of Supercenters or carports in our parking lots,” said Guggina.

The retailer also views drones as potentially helping them support their communities by utilizing the drone hubs as part of emergency responses or cell tower inspection, the exec said, in turn helping mitigate operations costs.

“The hubs can become tools that are used to service the community broadly,” he noted. “Delivery is obviously going to be a key piece of how the hub service our customers, but as we append alternative services, you can bring the cost of delivery down quite substantially.”

Walmart consumers are responding favorably to drone deliveries, according to Guggina, even when the novelty wears off. The retailer’s service level agreements with consumers for drone delivery is 30 minutes, but most of the time items are delivered between 15 and 22 minutes.