Industry insiders discuss the current state of voice commerce, how brands are already playing in this space, and what we can expect going forward

Voice assistants are part of everyday life. But how and to what extent are people using voice assistants to buy things? Zeroing in on voice-enabled smart speakers (Amazon Echo and Google Home), owners are using them to ask general questions (60%), get the weather report (57%) and stream music (54%), according to the media measurement company comScore. Further down the list of uses is finding local businesses (16%) and, further still, ordering products (11%) and food and services (8%).

While it’s too early to know whether voice-assisted shopping is the way of the future, it certainly is a way of the future. Industry experts we convened for a virtual roundtable discussion on voice commerce agree that brands need to figure out how to play in this space before voice-assisted shopping is commonplace. Just how long that will be is anyone’s guess, though.

Describe the current state of voice-assistant technology and how people are using it to shop.

Christina Dennaoui: A lot of research has been done by the platforms – the Amazons and Googles of the world – as well as others to learn how people are using voice broadly, and it’s mostly for utility-focused apps like alarm clocks as well as for basic Q&A interactions. Making purchases is toward the bottom of the list. It’s not very common right now. It’s an emerging behavior.

Tiffany Tan Kohler: People use voice commerce, specifically, for consumables and reordering products they are familiar with. The beauty of voice is that it enables frictionless shopping, so it’s particularly ideal for buying consumables that shoppers think about during their day. For example, the other night, I was watching a movie at home and noticed we were running low on microwave popcorn. I was able to place an order on my Echo – in that moment – before my current bag of popcorn even finished popping.

That makes it sound as though CPGs are winning in the voice commerce world.

Ryan MacInnis: If you look at the brands and products that have had the most success on voice-enabled smart speakers (Amazon’s Echo and Google’s Home), it’s the CPG brands, which makes sense because these speakers are in our homes, where we’re using and running out of things like laundry detergent or toothpaste. By contrast, it’s hard to get someone to buy clothing or shoes without a screen. But these other categories can still win with voice if they enable voice on their own e-commerce sites or mobile apps instead of building a voice experience on top of Amazon or Google.

Dennaoui: One of the challenges for CPGs is that the discovery of new products is pretty limited at this point; as a consumer, you kind of have to know what you want in order to tell the voice assistant to buy it for you. If you’re Colgate or Bic, that’s fine because you’re already top of mind, but if you’re trying to disrupt (a category) or intercept a consumer, right now voice isn’t great for that.

Discussions about voice-assisted shopping almost exclusively center on Amazon’s Alexa-enabled devices and Google Home, powered by Google Assistant. Are there other players in this space?

Ethan Goodman: The conventional wisdom is that Amazon and Google are the two major players. That’s true, but that specifically relates to smart speakers. When you take a step back and look at voice more generally, the big market share leaders are Google but also Samsung (Bixby), Apple (Siri), and even Microsoft (Cortana), which squeaks in before Amazon because the majority of people are using voice assistants on their mobile devices or on tablets or desktop devices. The majority of shopping use cases do happen on these speaker devices, though, so when you zoom in on those, Amazon has about 70% of the speaker market share, Google has more than 20%, and then you have everyone else fighting for the remaining single-digit percentage of market share.

David Zimmerman: Google over Christmas did a huge push for Google Home devices, offering them at significant discounts and pushing hard with advertising. But I have not seen any new data suggesting that it made a dent in the 70% market share that Amazon has.

Should brands consider Amazon a friend or foe in their voice commerce strategies?

Rob Ciaffaglione: If the shopper is using Alexa, that’s where brands need to be even though it would be a great business decision for Amazon to push its own private-label brands. If at first Alexa recommends the Amazon version and the shopper doesn’t want it, then a name-brand item will likely be next. Ultimately, the shopper decides what to buy and we need to make sure that our brands continue to have high equity and live up to their names.

MacInnis: I predict we’ll start seeing a lot more brands partnering with Google because Amazon controls so much of that voice experience with Alexa. You can connect and interact directly with a brand through Google Assistant, plus it’s integrated on mobile devices. A big reason more brands aren’t building on top of Alexa is because they don’t know where they stand in terms of discoverability.

Dennaoui: When we talk about Amazon and Google as the main players, when you peel back the onion, what we’re really talking about is Amazon versus Walmart and Target. Brands strategically have decided that the way to take on Amazon in this space and with e-commerce more generally is to get in with Google.

With Alexa making so few recommendations for a nonspecific product request, how can brands rise to the top of the list?

Ciaffaglione: We know that Alexa’s first product recommendations are based on past purchases, so I recommend overinvesting in getting people to purchase that very first item from your brand via voice. Maybe you need to give them a very aggressive discount through Alexa Voice Deals. You may not have a positive ROI on that right now, but I think in the long term it makes sense to invest dollars in that way to make sure you have that historic purchase in the algorithm.

Goodman: If there’s no purchase history, Alexa will likely suggest what Amazon designates as an Amazon Choice product, and there are things brands can do to increase the likelihood of earning this designation. It has to do with having a high number of four- or five-star reviews; it has to do with making sure your product has a low return rate and that it’s not out of stock often; and there’s a content relevancy component so if a brand is optimizing their product listings on Amazon, they’re also helping their voice search results.

Dennaoui: There’s been a lot of talk – all speculative – about paid product placement, so when Alexa is naming off various toothpastes, for example, your brand would top the list of results she reads back. For now, brands cannot pay to get their products pushed to the top of the list.

Zimmerman: I suspect and have read that people will not trust paid results from their voice assistants, suggesting it may be a credibility issue and a bad move on Amazon’s part.

How are brands leveraging branded voice apps (Alexa Skills and Google Actions) and are they a worthwhile investment?

Tan Kohler: We want to follow people where they are and be there for them. To that end, we have launched three skills for the Amazon Echo including our Glad Recycler skill to help people quickly identify if an item is recyclable.

Ciaffaglione: Our thinking when launching the Eucerin Skincare skill was to learn as much as we could about how people engage with voice technology. While we developed a skill we hope is going to aid the shopper on the path to purchase and ultimately convert them, the bigger goal for us is to learn about the shopper; learn about how they’re using their Alexa-enabled device; learn what time of day they’re most frequently engaging. These insights are going to set us up for a longer-term voice strategy and hopefully give us a competitive advantage.

Goodman: What’s interesting is that you can’t actually transact through a branded skill, so if you have a product recommender like Eucerin’s, the user can’t go ahead and buy the product in the skill. We can send a product card to the user’s Alexa app, and from there they can go to Amazon to order it. For this reason, some skills have little to do with the product but pay off a brand promise. For example, the low-calorie beer Michelob Ultra released a skill that provides audio workouts.

How will voice commerce evolve over the next three to five years?

Tan Kohler: As people become more comfortable with voice shopping, the types of items they purchase may expand beyond consumables to deeper-consideration purchases. As more voice integrations become available, people will expect more in-the-moment shopping experiences, and these can unlock touchpoints throughout a consumer’s journey – as they order coffee through their car while on their morning commute or order more olive oil through their smart kitchen appliance while cooking.

Zimmerman: I think the evolution of voice search is inherently connected to mobile. More and more consumers no longer pay for in-house internet Wi-Fi because their iPhones and iPads have unlimited data plans, so they just use those. Voice is going to be really helpful because anyone who’s tried to type a lot on their phone or tablet knows how frustrating that is.

MacInnis: Voice presents an opportunity to revitalize the brick-and-mortar experience with smart mirrors and the ability to digitally engage with a shopping assistant. Voice, accompanied by some sort of physical display, will provide for a more immersive experience in-store.

We’ve been talking about voice-assisted shopping exclusively, but to what extent does it go hand in hand with other technologies?

Ciaffaglione: I think the future of voice is also going to depend upon how it syncs up with other technologies because voice can be really powerful on its own, but sometimes you really do need a visual aid. How great would it be if that visual aid were some sort of augmented reality where you’re speaking to Alexa and also seeing something in front of your eyes?

Tan Kohler: We can see a world where voice is embedded into everyday devices such as wearables, appliances and vehicles. With the continued integration and improvements behind machine learning and natural language processing, we have every reason to believe we will see a convergence of voice shopping with the internet of things, augmented reality and other emerging technologies. Consumers will be able to – and expect to – talk to almost anything. 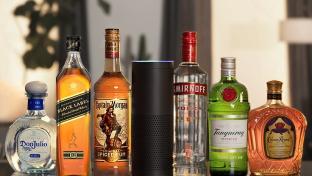