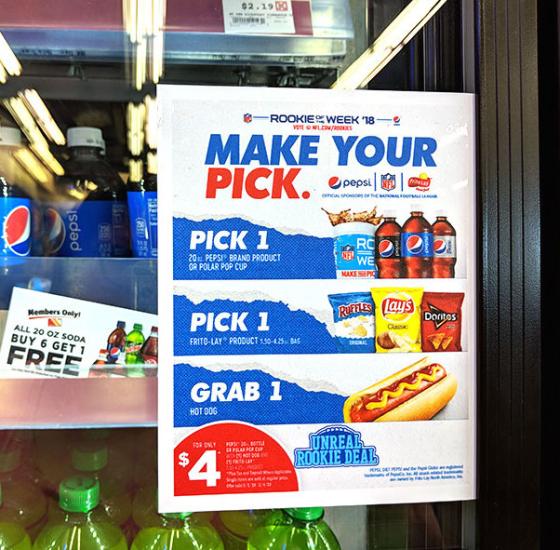 The effort this year centers on a $4 “Unreal Rookie Deal” comprising a hot dog, a Frito-Lay SKU, and either a 20-ounce Pepsi SKU or a proprietary Polar Pop beverage. (Last year’s deal was $5 and was limited to Ruffles potato chips while also encompassing an additional hot dog.) The offer is valid from Sept. 1 through Feb. 4, 2019.

In stores, clings on coolers and fountain machines, and a Pepsi- and NFL-branded Polar Pop cup spotlight the deal with a "Make Your Pick" message. Display ads within nfl.com and circlek.com, Facebook covers, and a video posted on Pepsi’s YouTube account (see below) support.

Circle K and PepsiCo are also promoting the deal with a sweepstakes awarding 12 grand-prize items signed by New York Giants player Saquon Barkley and 24 first-prize $20 store gift cards. Consumers enter from Sept. 7-26 by replying to a Sept. 7 update posted across the retailer's regional Facebook pages. Shoppers are encouraged to reply to the post with the hashtag #RookieSweepstakesEntry and either a picture of their "Unreal Rookie Deal" meal or a comment on their favorite NFL rookie of the 2018-2019 season. Social Forces, Tampa, FL, administers.

The aforementioned digital and in-store activity also serves to spotlight PepsiCo’s “Rookie of the Week ’18” program, which allows consumers to vote on an NFL rookie via nfl.com/rookies. During the 2018 football season, an NFL player will be selected weekly through the page to receive "Pepsi rookie of the week" honors.

Elsewhere in stores, account-specific, football-themed cooler clings from Dr Pepper promise shoppers 30% off "your team's gear" at fanatics.com with the purchase of a qualifying Dr Pepper SKU from Aug. 1 through Dec. 31. 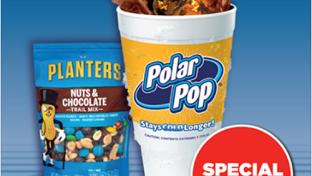