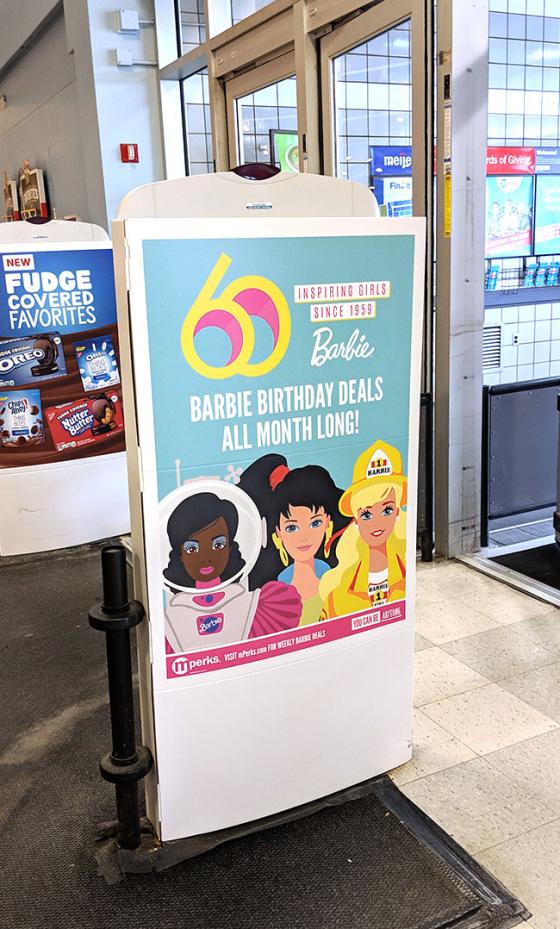 Meijer is touting month-long "birthday deals" on Mattel's Barbie SKUs as one of several retailers tying in to the doll's national 60th anniversary celebration.

Employing an "inspiring girls since 1959" message, security wraps and floor clings in stores depict Barbie as a firefighter and an astronaut while promising mPerks coupons "all month long." Features in March 3 and 10 digital circulars dangled 20% off select Barbie SKUs. A meijer.com home page display supports, directing users to mPerks digital coupons for the brand.

The March 3 feature also plugged a March 9 one-day deal offering 60% off a Barbie "career doll." The brand's 60th anniversary collection celebrates six careers that have been in the Barbie line from its inception and continue to be professions in which women are underrepresented: astronaut, athlete, pilot, journalist, politician and firefighter.

Meijer isn't the only mass merchant tying in to Barbie's 60th birthday. Barbie SKUs earn secondary merchandising space at Target via endcaps. A character shop on target.com also spotlights the career doll collection, Barbie apparel and exclusive SKUs  including a Barbie Stacie & Chelsea doll soccer play set. At barbie.com/target, visitors can vote for one of three Barbie T-shirt designs from March 6-30. The winning shirt will be sold exclusively at Target stores and target.com in fall 2019.

Channel leader Walmart is hosting various Barbie parking lot events at select stores across the country. The Barbie "Be Anything" traveling pop-up tour kicked off earlier this month at a Walmart in Bentonville, AR. Various social media posts from Barbie tout the events. The brand is also enjoying secondary merchandising space in Walmart toy departments via tall pallet displays and an endcap display.

Along with the anniversary career dolls, Barbie is also spotlighting a collection of dolls that serve to honor 20 women role models across multiple countries and continents. The group of women range from 19- to 85-years-old and include actress and activist Yara Shahidi, tennis star Naomi Osaka, and activist and model Adwoa Aboah. The dolls do not appear to be available for purchase at this time.

Beyond unveiling new toys, Barbi also pledged to donate a dollar for every doll sold between March 6-11 to fund organizations that aim to "level the playing field for girls" as part of "The Dream Gap Project" the brand kicked off this year to close the gap that comes between girls and their full potential. (See video below.)

In an atmosphere dominated by the #MeToo movement, the brand is underscoring the fact that the toy was invented by Ruth Handler, a mom and business woman who thought her daughter's toy choices were too limited.

Speaking to a Shoptalk audience earlier this month, Mattel chief brands officer Richard Dickson acknowledged that Barbie can be a polarizing topic, referring to complaints about her role in promoting an unhealthy body ideal, but also said the iconic doll has evolved to represent feminist ideals, girl power, and a diversity of ethnicity and interests. "Those who love us and those who hate us are involved in the conversation," Dickson said.