Circle K, Monster Get Shoppers in the Ring

Circle K, Monster Get Shoppers in the Ring 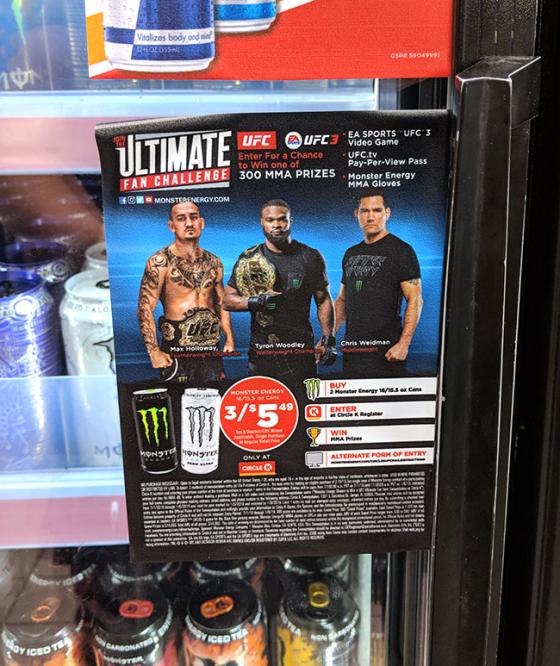 Circle K conducted another MMA-related sweeps with the beverage manufacturer earlier this year, awarding one shopper a chance to hang with UFC fighter Donald "Cowboy" Cerrone.

PepsiCo's Gatorade is also running a sports-themed sweeps at the convenience store chain, awarding a grand-prize winner with box seat tickets to a game in the 2018 Major League Baseball World Series presented by YouTube TV. (The live TV streaming service last fall became the first-ever brand to “present” the World Series, and the deal was extended for two more years.) Secondary prices include $50 mlbshop.com gift cards, as well as $10 or $25 Circle K cards.

Shoppers enter from July 1 through Aug. 26 by purchasing two 28-ounce Gatorade SKUs and either submitting their phone number when prompted at checkout or tapping a "claim the deal" button for the sweeps found within the retailer's mobile app to obtain a time-sensitive barcode to scan at checkout. Prize Logic, Southfield, MI, administers. A mobile app ad, an Aug. 1 email, and an in-store cooler cling support.