Activation: As an overlay to Big Red’s national “100 Days of BBQ” campaign, the partners staged cooking classes at nine stores in the summer of 2016. Social media and in-store activity supported the effort.

Austin, Texas — Big Red has had a long association with barbecue and grilling, but maintaining and increasing that equity requires regular marketing activity. Last year, Big Red brought that connection to Kroger shoppers in the Louisville, Kentucky, market by running cooking classes in partnership with Weber-Stephen Products at nine stores as an overlay to the brand’s national “100 Days of BBQ” marketing campaign.

“Our consumers many times pair Big Red and barbecue,” says Big Red marketing director Sergio Trujillo. “It serves as a way of both complementing the bold flavors of barbecue and to tame the heat and spice. Weber was a natural fit.”

The classes were run by the Weber Mobile Grill Academy, a set of trucks that conducts cooking demonstrations across the country with brand partners. The vehicles were first developed in 2015 as a training tool for key retailers including Kroger, but the brand began testing them with grocery shoppers and found significant excitement.

“We weren’t experienced in the logistics of it,” says Weber’s Jane Quinn, B2B – promotions and partnerships. “We discussed internally turning to our partners to see if they had interest and letting them lead the way.”

Weber settled on working with brands like Big Red to develop programs that benefit Weber by increasing interest in grilling while helping the brands see a lift in sales. For Big Red, Weber taught three free classes each day with up to 30 students per class at the nine Kroger stores, demonstrating how to mix soda into beef to produce a burger with a caramel-like flavor and mix the Big Red into grilled onions to turn them bubblegum pink.

“The grilling class for Big Red was about grilling burgers the Big Red way,” Quinn says. “There were a lot of consumers who knew Big Red and loved it, and a lot of others who hadn’t heard of it. Weber measured success in getting the classes filled and getting people to come out. People were invited to watch and learn. The truck is a showstopper. When it’s in the parking lot, people stop by.”

Big Red measured success through both attendance and case sales over previous years, with the goal of a 10% increase for participating stores. About 75% of stores achieved that, with the average dollar sales increase being 15.7% over previous years. Unit volume also increased 20% during the campaign.

The events, which ran between Thursday and Sunday from Memorial Day through Labor Day, were supported by stanchion signs in stores along with geo-targeted Facebook and YouTube ads. The digital activity originally encouraged consumers to text to win a spot at one of the events, with Mozeo, New York, handling. However, high demand by both consumers and store employees led them to make the events open to drop-ins. The events helped increase foot traffic to the participating stores during the key barbecue periods.

Kroger is a longtime partner for Big Red, with a strong presence in Louisville and Southern Indiana, which are among the brand’s most important markets in the country. Along with the events, Big Red developed exclusive displays for Kroger that depicted the soft drink along with Weber grills and Yeti Coolers products.

Displays at other key retailers including H-E-B and Walmart promoted the national campaign, but the Kroger displays were both larger and in stores for longer. 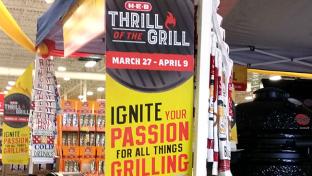 H-E-B Gets Its Grill On