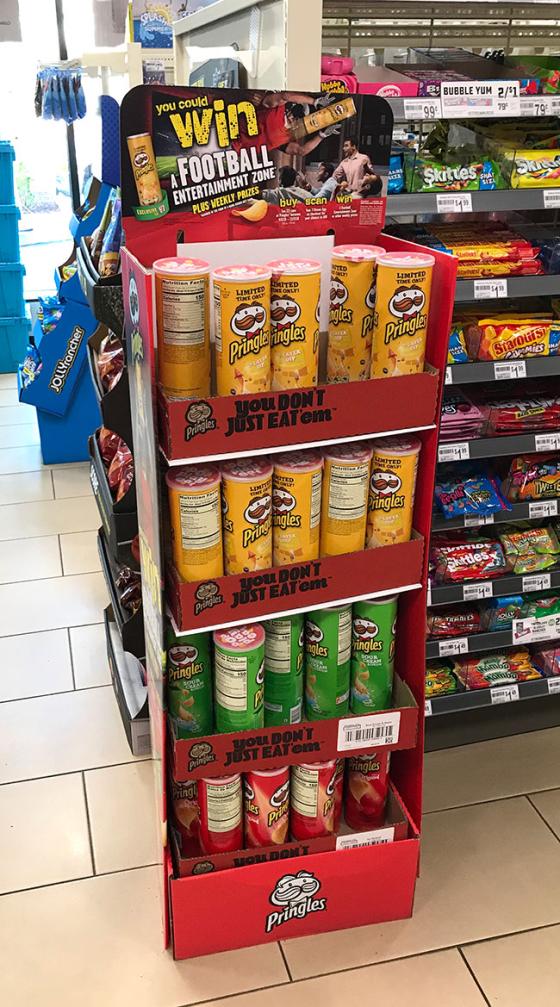 The limited-edition Pringles chips are inspired by the Tex-Mex party dip traditionally made of refried beans, guacamole, sour cream, salsa, cheese, tomatoes, green onions and olives. The chips were first spotted in 7-Eleven stores in August, according to various reports.

7-Eleven and Pringles are drumming up support for the chips by running a sweepstakes awarding a grand-prize "Ultimate Football Viewing Package" and 54 secondary prizes of a $50 7-Eleven or fanatics.com gift card. 7Rewards loyalty members enter from Sept. 3 through Nov. 2 by purchasing two eligible Pringles SKUs.

Among regional football-themed activity, Keurig Dr Pepper activated its sponsorship of the National Football League's Chicago Bears on stadium-style cups for proprietary Big Gulp and Slurpee beverages at Chicago locations. The cups are spotlighted via translite signs and merchandised on countertop displays alongside straws depicting the team’s helmet. A total of 15 teams, including the Dallas Cowboys, will be spotlighted via stadium-style cups varying by market (with stores in some markets simply stocking generic pro-football cups). Helmet straws for participating teams will also be available for purchase, depending on the market.

For its own part, 7-Eleven also is letting 7Rewards members earn points by participating in football-themed, augmented reality experiences through the retailer's mobile application. Translite signs tout the experiences in stores.

Convenience Stores
7-Eleven Celebrates Its Birthday with the Cap'n

Convenience Stores
7-Eleven Gets in the Game with PepsiCo, Mars