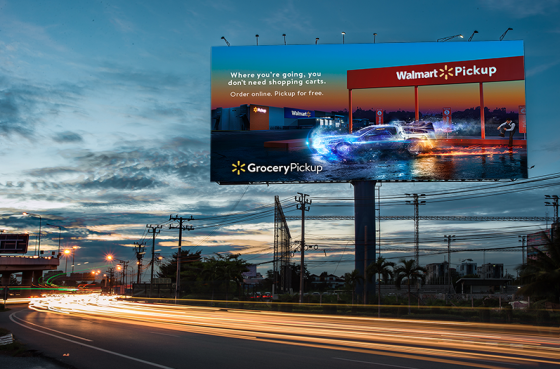 Now that Walmart has expanded online grocery pickup to more than 2,000 stores — about 40% of its U.S. fleet — the retailer for the first time is supporting the service with a cross-platform national marketing campaign that launched during NBC's Jan. 6 Golden Globe Awards broadcast.

Going heavy on the special effects, the retailer's spots put a cool spin on the ease, speed and convenience of grocery pickup. Altogether, the spots show 12 iconic cars from film and TV pulling up to Walmart to experience the "magic moment" when employees load the customer's trunk with groceries while demonstrating that it's for everyone regardless of what car they drive, as explained by Walmart U.S. chief marketing officer Barbara Messing in a corporate blog post.

The cars were mostly replicas provided by several Hollywood Studios, and the spots are from Publicis Groupe-led Department W. The background music is Gary Numan's "Cars."

The one-time Globes buy was a strategic move intended to build brand awareness and attract new users, helping Walmart stand out as more retailers roll out their own curbside services. Walmart is following the four Globes airings with 15-second national TV spots as well as six-second digital and social-media spots, AdAge reported. The retailer additionally has posted various versions to its YouTube channel and is employing the same creative on its Grocery Pickup landing page and a supporting walmart.com home page carousel ad, projecting a consistent message across platforms.

"One of the things we did differently was create a whole host of additional 'famous cars' content to ensure we're reaching busy time-starved families wherever they are — including using social media, watching online videos, listening to the radio, and of course, while shopping our stores," Messing said in the aforementioned blog post.

The campaign was the most-talked-about ad during the Golden Globes, with 8,100 mentions, according to a Marketing Dive report citing social listening and analytics company Talkwalker. The 90-second-version of the ad (see below) had garnered more than 16 million views by midday on Jan. 8.

Walmart also has continuously supported ongoing rollouts of Grocery Pickup with a variety of in-store, digital and print activity viewable to P2PI members.

In related award show news, the retailer additionally will be advertising during this year's Academy Awards, as it has done since 2017.