MANUFACTURER: Tyson Foods
KEY INSIGHTS: People love holiday gatherings, but cooking for them can be a burden and stressful.
ACTIVATION: The “A Season to Share” program leveraged nine recipe videos with actor Anthony Anderson using products from the Jimmy Dean, Sara Lee, Hillshire Farm and Wright brands. Deployed during the Thanksgiving, Christmas and New Year’s holidays, the videos were promoted at retail (including Ahold Delhaize), although without any exclusive partnerships.

Springdale, Ark. — For its first nationally scaled holiday platform, Tyson Foods called on the charm of comedic actor Anthony Anderson (star of ABC’s “Black-ish”) and his mother for unscripted videos that anchored a predominantly social and digital push during the 2016 winter holidays.

Called “A Season to Share,” the program included nine recipe videos using products from Tyson’s Jimmy Dean, Sara Lee, Hillshire Farm and Wright brands. Three improvised long-form videos with Anderson and his mother, Doris Day Bowman, were pillars for each of the major holidays with a video for Thanksgiving, Christmas and New Year’s 2017.

Working with its shopper marketing agency, IN Marketing Services, Norwalk, Connecticut, Tyson aimed for videos that “didn’t feel like a cooking how-to but a candid moment between [Anderson] and his mom,” says Wendyjean Bennett, senior director of shopper marketing and activation, Tyson Foods. “Chris Dealy, the director, has an extensive background in advertising and comedy and worked with the Emmy-nominated actor and his mother to draw out an authentic, natural performance that integrated clear program and brand messaging.”

Reveal 42, New York, produced and filmed the videos. In addition to the three unscripted videos, Anderson appeared alone in six short recipe videos telling consumers how to make a dish, reading off ingredients and steps involved. Tyson hosted the videos on a promotional site and pushed out the content through multiple social media platforms via the brand accounts of Jimmy Dean, Sara Lee, Hillshire Farm and Wright, as well as Anderson’s social media accounts. 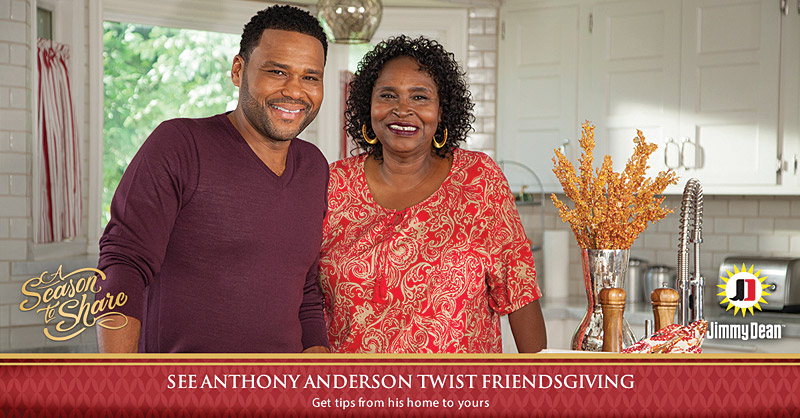 “A Season to Share” digital ads with retailers such as Ahold Delhaize supported the campaign and touted a recipe that consumers could click and link to. Content from the videos ran on in-store TV networks during the holiday months at select national retailers. Recipes were also shared inside stores through on-site demos, which retailers promoted with email blasts to drive store traffic. The campaign did not include any exclusive retailer partnerships.

“‘A Season to Share’ is aimed at connecting retailers and their consumers through heartwarming and engaging content in multiple formats that would fill social feeds with new inspiration,” says Bennett. “One of the insights that led to ‘A Season to Share’ was the idea that people love holiday gatherings because it’s a fun time to get together, share, enjoy and impress new and old friends with their favorite dishes.”

Bennett adds that the insights showed cooking for the holidays can be a burden and stressful, so the campaign tried to spotlight easy and affordable recipes that had a new twist. The charm of the videos kept things natural and loose, as opposed to stiff or tightly scripted cooking demos.

“We needed to balance providing the brand inspiration with the natural, comedic, improvisational talent and dynamic mother-son banter that came so naturally to Anthony and Doris,” Bennett says about the three long-form videos. “With any unscripted content, it’s imperative to provide a framework for the talent to be inspired but not restricted by.”

Before filming the videos, Tyson met with Anderson to get a feel for what makes the holidays special to him and his mother, and which foods and recipes play an important role in his holiday dinners. Those talks influenced the narrative structure of the videos, Bennett adds.

No results were available at press time, but Tyson strived to make an impact in the social space and to increase category growth and basket size through a campaign that touted a portfolio of products for the holiday season, Bennett says. 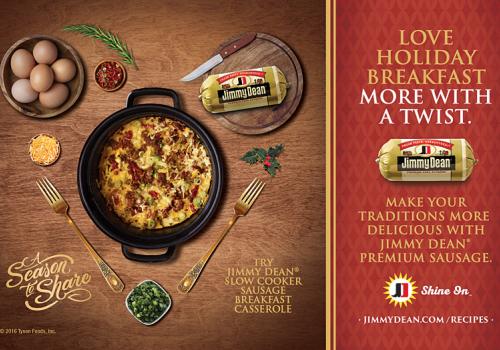 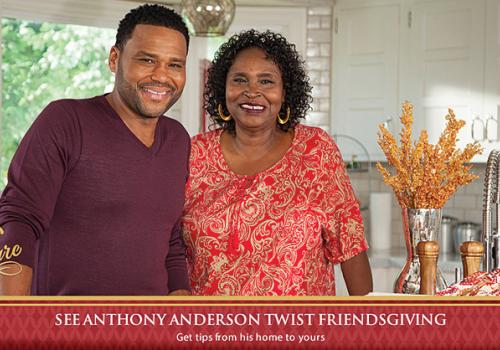