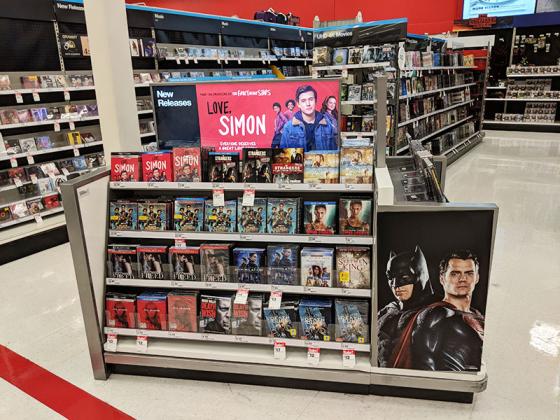 Target is tying in to the designation of June as Pride Month by stocking an exclusive version of 20th Century Fox's Love, Simon home video as well as a limited-edition gift set from digital-native men's grooming brand Harry's.

The Love, Simon DVD and Blu-ray Disc set rolled out to Target stores on June 12, boasting exclusive bonus footage and a booklet comprising content from the movie. Starring Nicholas Robinson, Keiynan Lonsdale and Jennifer Garner, the film is a romantic comedy-drama that centers on closeted gay teenager Simon Spier (played by Robinson). Illuminated signs tout the film's arrival in stores and account-specific floorstands were spotted in a Culver City, CA, store. A feature in the retailer's June 10 circular, a display ad on target.com, and Facebook and Twitter updates support.

Lonsdale also posted a June 12 video to his Twitter and Facebook accounts instructing fans to go to the Culver City Target location and say the word "bunnydog" to the store's manager. The first five shoppers to say the code word received a DVD autographed by the actor.

Target also is stocking Harry's limited-edition "Shave with Pride" gift set in stores and online. Priced at $24.99, the set encompasses Harry's shaving gel, a razor handle in an iridescent finish and three blade cartridges in a bright, cheerful box designed by artists Craig & Karl. According to the retailer, 100% of profits from the sets will be donated to LGBTQ+ causes, including the Gay & Lesbian Alliance Against Defamation (GLAAD). A display ad on target.com touts the set, which is also available on harrys.com.

Elsewhere online and in stores, the retailer released a “Pride collection” comprising more than 90 new rainbow-adorned and pride-themed SKUs, including more apparel than ever before for adults and kids. The collection is available at 295 of the retailer’s 1,829 stores and via a promotional page on target.com.

“We just set out our pride products in the tourist shop and our guests love them,” said Thomas Cordara, team leader at New York’s Herald Square store, in a June 11 A Bullseye View blog post. “The adult tank tops in particular have been really popular this year. We're also stocking up on water, sunscreen, hats and other outdoor essentials as we’re anticipating a very busy weekend.”

Cause Marketing/ Community Programs
Pride Month Comes Out into the Aisles

Target Beefs Up Its Beauty Game