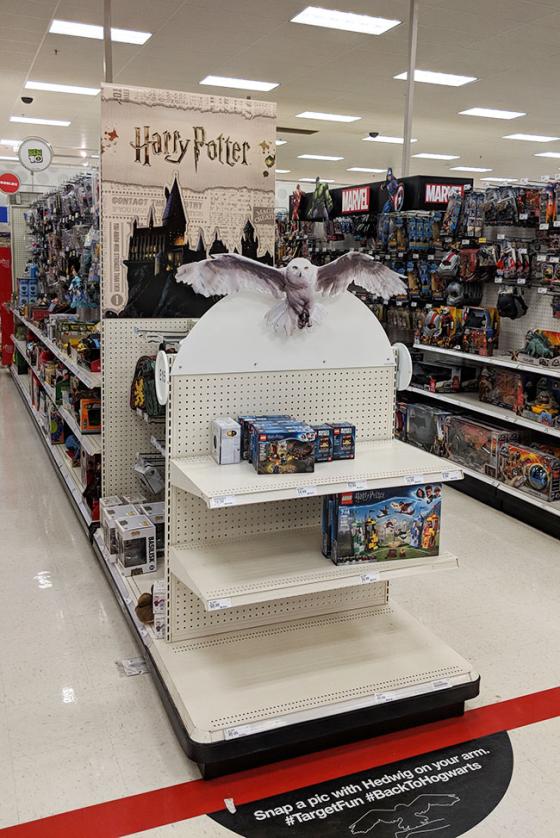 Target is celebrating the 20th anniversary of the release of J.K. Rowling’s first Harry Potter novel by stocking seven licensed sets from Lego Group's flagship brand a month before other retailers.

Rolled out to stores and target.com earlier this month, the sets include Lego BrickHeadz depictions of Harry Potter, Dumbledore, Ron Weasley and Hermione Granger from Warner Bros.'s Harry Potter film franchise as well as Lego recreations of select scenes from the films such as the Weasleys’ car crashing into the Whomping Willow tree and the Dementor attack on the Hogwarts Express.

A feature within the retailer's July 1 circular touted the arrival of the Lego sets, positioning the SKUs as "new and only at Target" and encouraging shoppers to "get the magic early." A July 5 A Bullseye View blog post also served to spotlight the Lego sets as well as 120 other licensed SKUs and "magical finds" — ranging from toys and bedding to clothing and accessories —  to celebrate the 1998 release of Rowling’s Harry Potter and the Sorcerer’s Stone. The line up includes anniversary editions of the book series from Scholastic, containing new cover art illustrated by Brian Selznick, as well as exclusive:

Lego sets, Funko Pop figurines and select apparel and accessories are stocked on an endcap in the toy department outfitted with signage depicting Potter's owl Hedwig. A floor cling near the endcap encourages shoppers to snap a photo with Hedwig on their arm and employs hashtags #TargetRun and #BacktoHogwarts. Target stores that have been remodeled will also have a "TrendSpot" display with curated Harry Potter products.

“Our guests love Harry Potter — and with our incredible assortment and exclusives, Target’s the ultimate destination for all things Harry Potter,” said Mark Tritton, Target's executive vice president and chief merchandising officer, in the blog post. “We’re constantly collaborating with the best partners in the business to create unique products that we know our guests will love. And now, for the first time, we’re teaming up with Lego to give fans early access to seven must-have sets. It’s pure Harry Potter-inspired fun, and totally Target.”