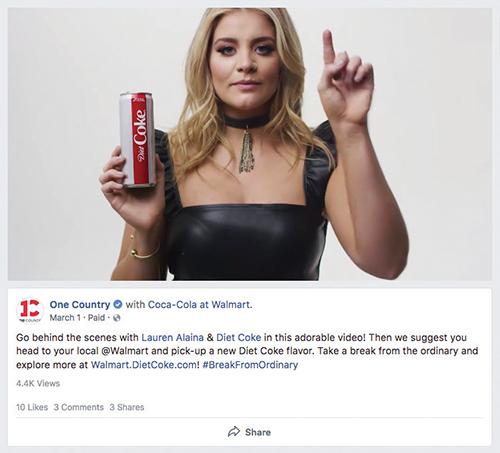 Atlanta — Country music fans are 125% more likely to visit a Walmart store (to the tune of 15 times a month or more) compared to the rest of the general population, per the GfK MRI “Survey of the American Consumer.” With that insight, for the last three years Coca-Cola Co. has successfully tapped the twang and star power of country music artists to engage with its consumers over social media and drive them to Walmart.

Early in 2018, the campaign tied into the relaunch of Diet Coke using artist Lauren Alaina to provide short posts on Instagram, Facebook and Twitter. “In her own words, she encouraged fans to try the new Diet Coke flavors and to pick them up at Walmart,” says Coca-Cola’s Amanda Whitaker, director of shopper marketing, Walmart team.

The campaign included posts of native stories and social shares from popular country music websites, as well as exclusive content featuring Alaina on the Diet Coke product page at Walmart.com. “For the Diet Coke relaunch, because the sleek new packaging is so important to see and because our Millennial target is so active on social media, the approach was to create short, snackable pieces of content with Lauren being herself, goofing off with the new cans, trying all the flavors and having fun,” Whitaker says.

Alaina continued to play a big role in the Coca-Cola at Walmart summer campaign, according to Whitaker. Coca-Cola and its agency, Springdale, Arkansas-based Saatchi & Saatchi X, teamed with Taillight, Nashville, Tennessee, on the social content. Taillight is especially plugged into the country music scene, securing the talent for the campaigns, using its data to recommend artists that best fit a program, producing and managing the social content.

In 2016, Taillight recommended Coca-Cola work with Kelsea Ballerini on a video that could only be viewed when scanned by a mobile phone from an in-store display. A 2017 effort featured Alaina and a tie-in with Dasani water, granting fans a behind-the-scenes look at her music video and an intimate look at her workout routine. During football season that year, artist Jake Owens shared stories for Coca-Cola, Coke Zero and Powerade, and there have been other social programs.

Over the three years, Taillight has leveraged social tech like Boomerangs on Instagram and Instagram Stories, as well as Snapchat content. Since 2016, Coca-Cola has registered more than 122 million impressions and 153,000 engagements through the campaigns.

For Coca-Cola, the social campaigns make a difference getting a shopper base (18 to 24 year olds) into Walmart to try new products. “Millennials don’t feel Walmart is the best place to try new products,” Whittaker points out. “By partnering with country artists, and specifically Lauren Alaina, we have a fan demographic that so closely aligns with the Millennial Walmart shopper.”

Whittaker says the country artist partnerships “are so important” to the Coca-Cola brand and its work with Walmart. “Artists help us make an emotional connection and country fans are brand loyal,” she says. “Through artists, we can speak directly to our key shopper, drive traffic to Walmart, and inspire trial of the new flavor-filled lineup of Diet Coke.”

Mass Merchants
Walmart Shares a Coke with the Squad