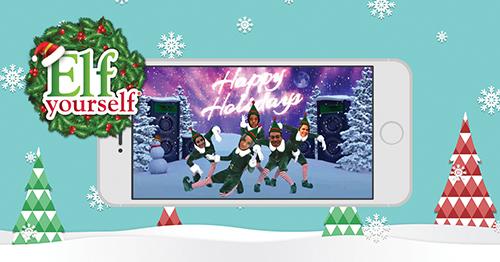 The Office Depot Christmas campaign “Elf Yourself” returned in 2018 with a new augmented reality feature inside the Elf Yourself mobile app, and it also leveraged Facebook’s AR function for mobile. Office Depot has been doing an Elf Yourself campaign since 2006, providing some way for consumers to comically see and capture themselves as elves. This year through the Elf Yourself app consumers could take a photo of themselves, friends and family members or upload photos from the phone or Facebook and the pics get overlayed onto dancing elf bodies. In addition, Facebook users could overlay elf-wear onto people through its AR camera effects or overlay their faces onto dancing bodies. Office Depot ran an ad in the newsfeed that showed how the AR function worked within Facebook and had a link to get users started. The Elf Yourself app also featured a “Mensch on a Bench” tool for a Hanukkah dance option. Office Depot asked for consumers to share creations online with #ElfYourself. Videos on YouTube promoted the app, showing a glimpse of the humorous dance sequences, too.