League teams with five brands and retailers to engage fans 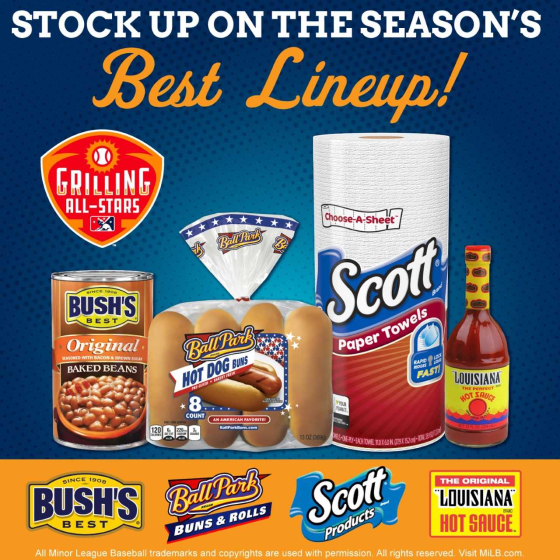 Minor League Baseball (MiLB) has rolled out its largest retail campaign ever. The national “Grilling All-Stars” program encompasses five brands with activation in more than 100 MiLB markets and 13,000 retail locations during the 2019 season. The program was created with Harrisburg, North Carolina-based agency Brand Activation Maximizer (BAM).

MiLB and BAM created the program following extensive research showing that the league’s fans are heavy hitters when it comes to grilling-related purchases. More than 10 million MiLB attendees have grilled at least once in the past year and have spent a total of more than $2 billion on groceries in the past week, according to Nielsen data.

The program gives MiLB partners an efficient way to convert their league sponsorship into retail activation, says Mike Morris, consumer experience manager for Bush Brothers & Co. Morris turned to BAM to help find other brand partners to share cost while creating scale and retailer excitement that it could not build simply on its own.

“The in-park activation portion of the program is key since it focuses on the ‘pre-shop’ portion of the path to purchase,” Morris says. “That means we are able to drive consumers into stores looking for our brand, reducing our dependence on hot price points and in-store display during a few key weeks.”

The program engages fans in-ballpark using a digital network powered by ISM Connect, Doylestown, Pennsylvania. It encourages fans to use Grilling All-Stars products when planning summertime fun around the grill, and gives them the chance to win exclusive prizes, retail packages, experiences and more.

“Grilling All-Stars” also gives the brands an opportunity to reach the 40 million consumers who attend MiLB games each year – and to join in on the fan interaction at games. “Engaging with our fans in-ballpark is a point of difference for us in the marketplace,” David Wright, chief marketing and commercial officer for MiLB, said in a media release announcing the program. “We are excited to see that engagement drive success at retail.”

The program is supported in grocery stores in participating markets with signage that varies by retailer. Some will have header cards, some shelf tags, and others both. Participating retailers include Weis, Winn-Dixie, Meijer and multiple Albertsons Cos. banners. Ahold Delhaize USA’s Food Lion also is participating with in-store Vestcom tags and a prime endcap position for the program in its stores.

“Minor League Baseball is a massive national property, but it allows us to activate locally,” BAM president Tad Geschickter said in the release. “We look forward to connecting fans in each ballpark to our brands at participating retailers and to ultimately driving some tremendous sales results for all involved.”

The MiLB creative team played a significant role in the program, as did the marketing communications firm Pinckney-Hugo Group, Syracuse, New York.